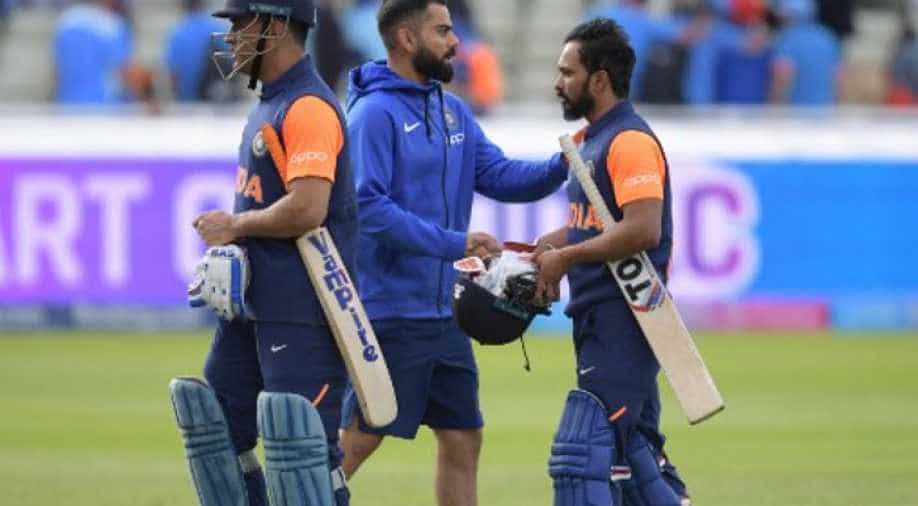 Rohit Sharma defended his batsmen while stressing the England bowlers made it hard for both Dhoni and Jadhav.

Rohit Sharma admitted there were "lessons" to be learnt from England's bowlers after India suffered their first defeat of this World Cup against the hosts on Sunday.

Sharma hit 102 - his third century of the tournament - but India fell short of their 338-run target in 31-run loss at Edgbaston.

The Indian vice-captain defended his batsmen while stressing the England bowlers made it hard for both Dhoni and Jadhav, who were both booed by a large Indian crowd in Birmingham.

"When MS and Kedar were batting, I think they were trying to hit, but they were not able to because of the slowness of the pitch," said the Indian vice-captain.

MS Dhoni and Kedar Jadhav were criticised for their lack of intent in the final five overs when the duo managed just 39 runs.

It is not the first time that Dhoni, who remained unbeaten on 42 off 31 deliveries, and Jadhav, who made 12 not out, have got flak for batting slowly.

Jonny Bairstow led England's charge with his 111 off 109 balls to set up an England victory that got them a step closer to booking a semi-finals berth.

Bowlers led by Chris Woakes then bowled a disciplined line to choke India in the final overs despite a 138-run second-wicket stand between Sharma and skipper Virat Kohli.

"They played better cricket throughout this match. While batting they had not one but three partnerships. On the other side we had only one big partnership," Sharma told reporters after India's first loss in seven matches.

"They mixed the short ball and the slower ball and forced us to hit at the longer boundaries which was a lesson for us for our next game."

India need to win one of their remaining two group matches to clinch their semi-final berth, with their next clash against Bangladesh slated for Tuesday back in Birmingham.

Virat Kohli's side looked capable of making a record World Cup run chase at 198 for two from 36 overs, only to lose the plot in the last 10 overs.

Woakes struck early to send back KL Rahul trudging back to the pavilion for nought and later cut short Sharma's innings in the 37th over.

"Losing an early wicket always puts you under pressure, and we lost KL right at the start, and they bowled pretty well in the first 10 overs," said Sharma.

Kohli was not too pleased with the ground in Birmingham having a very short boundary on one side, saying the toss became crucial due to this factor.

"The toss was vital, especially since the boundary was that short. It is a coincidence that it just falls under the limitations of the shortest boundary you can have," Kohli said in the post-match presentation.

"It is quite bizarre on a flat pitch. It is crazy things fall in place like that randomly."

"If the batsmen are able to reverse sweep you for six on a 59 metre boundary there is not much you can do. And one side was 82 metres."