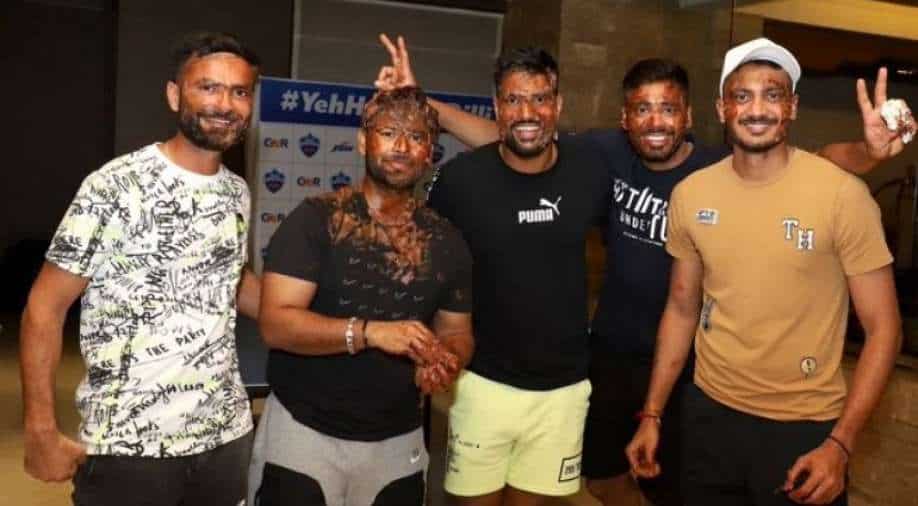 Delhi Capitals' win over MS Dhoni-led CSK was definitely a call for a double celebration and exactly the same happened at DC's team hotel. Watch the video here:

Delhi Capitals (DC) captain Rishabh Pant turned 24 on Monday (October 4) as his team gave him the perfect birthday gift present as they defeated Chennai Super Kings (CSK) by three wickets and moved to the top of the IPL 2021 table.

Both DC and CSK have booked their playoff berths, but finishing in the top two gives the team a second chance among the four teams to make the finals on October 15. "Not a bad birthday present, but in the end, we made it tough for us," said Pant after the match. "Absolutely big win, and want to be absolutely sure we finish in the top two," he added.

The win over MS Dhoni-led CSK was definitely a call for a double celebration and exactly the same happened at DC's team hotel as Pant and his teammates had a gala time.

In the video provided by the Delhi Capitals, Pant was seen cutting the cake with DC teammates and staff members and the players were seen enjoying, rubbing chunks of cake on each other's faces.

Grateful to everyone who took time out to call, text and send messages to wish me. It made my special day, even better. To those who were around me, please keep checking your face for cake stains. I heard they don't come off easily! 🥳😆 @DelhiCapitals pic.twitter.com/cc42ZyjTMV

During the match, birthday boy Pant won the toss and opted to bowl first. On being asked about his mentor Dhoni, Pant said, "Always great learning from him, but right now he's a rival."

While chasing 137 for victory, Shimron Hetmyer produced a match-winning cameo as Delhi Capitals edged out Chennai Super Kings by three wickets. "Very important for me to finish games," said the left-handed Hetmyer. "I tell the guys that is what I am paid for and I try to finish as many games as possible."

Spinner Axar Patel set up victory with impressive figures of 2-18 as Delhi kept down Dhoni's Chennai to 136 for five despite an unbeaten 55 by Ambati Rayudu.