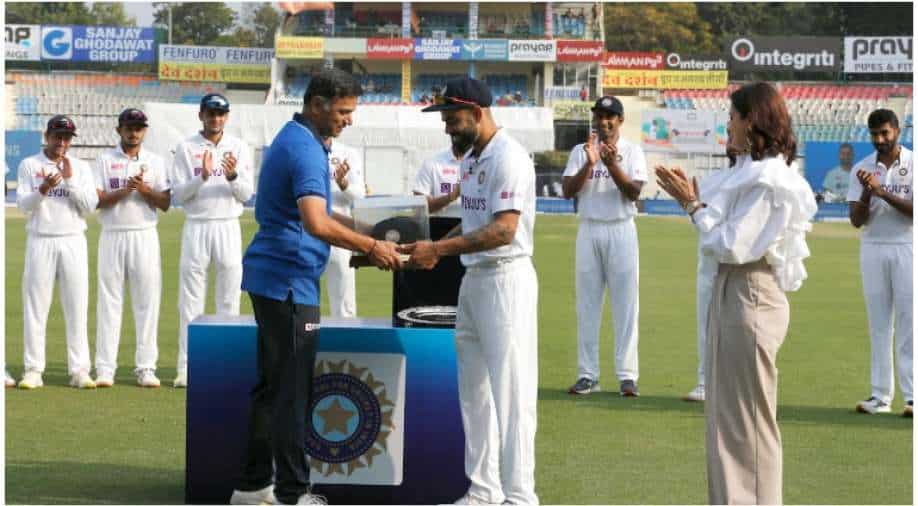 After Rohit Sharma-led Team India won the toss and opted to bat first, at the IS Bindra Stadium in Mohali, Dravid presented Kohli his special cap ahead of his historic outing in whites for the national side. Dravid told, "When you started out as a kid you must have wanted to play one Test for India, you stand here on the cusp of your 100th. It’s a testament to everything that is great in our sport... sweat, discipline, courage, skill, determination, desire, focus, you had it all. You had a great journey. You can be very proud of not only playing the 100th Test match but also for the great journey that you have navigated through."

“Congratulations to you and your family on this fantastic achievement. It is well deserved, it is well earned… hopefully it is just the start of many more bigger things to come and as we say in the dressing room, ‘double it up’," he added.

Here's the video of the felicitation shared by the BCCI's Twitter handle:

What a moment to commemorate his 100th Test appearance in whites 🙌🏻

Words of appreciation from the Head Coach Rahul Dravid and words of gratitude from @imVkohli👏🏻#VK100 | #INDvSL | @Paytm pic.twitter.com/zfX0ZIirdz

Kohli, who also had the presence of his wife Anushka Sharma on the ground, acknowledged the BCCI, Team India, his family's support, childhood coach and said, "Thanks, Rahul bhai, it's a special moment for me. My wife is here with me, my brother is there in the stands. It's a team game and the journey wouldn't have been possible without you guys. Thanks to BCCI too. I couldn't have received it from a better person, my childhood hero. I still have that picture with you from my U-15 days."

In 99 Test, Virat has amassed 7,962 runs at an average of over 50, with 27 hundreds and 28 half-centuries. He also has most double tons by a Test captain (7) and led India superbly in whites before resigning from the post early this year.