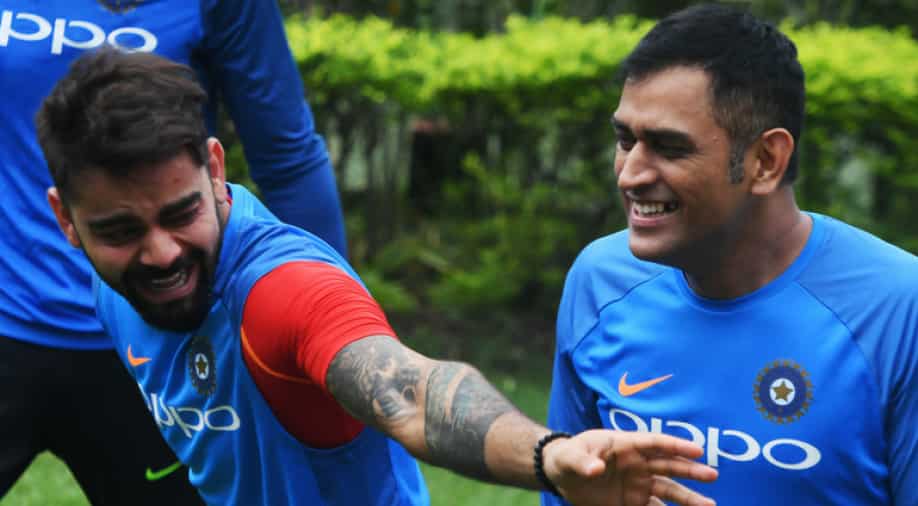 India's victory over Australia in the third-ODI on Sunday was its ninth consecutive win under Kohli's leadership. The previous record under Dhoni during February 2008 and January 2009 Photograph:( AFP )

Virat Kohli took over from MS Dhoni as India's full-time captain in early 2017. Former Indian bowling coach Bharat Arun has now opened up on the smooth transition between the superstar duo.

Under MS Dhoni, Team India achieved wholesome success as the former Indian wicketkeeper-batsman remains the only international captain to lead his national side to all three major ICC titles during his captaincy tenure. When Dhoni stepped aside as the captain from all formats, in early 2017, Virat Kohli stepped up and took over the reins from his senior pro.

Dhoni, however, remained a vital cog of Kohli-led India's limited-overs side, having retired from Tests in late 2014, till he played his last match in the 2019 ODI World Cup and decided to hang up his boots the following year. Recently, the former Indian bowling coach Bharat Arun opened up on the smooth captaincy transition in Indian cricket between Dhoni and Kohli.

ALSO READ | If you're trying to do something for the team, it will never go unnoticed, says Rohit Sharma post NZ T20Is

“Ravi told the importance of having a senior member like Dhoni in the team. It was about giving a lot of respect and he would definitely help him. Kohli understood that of course and it was a seamless transition. You could see the respect in the way Kohli would often let Dhoni handle little details and prowl on the boundary in ODIs. That kind of stuff can’t have happened without trust and respect. And Dhoni also saw he was given the space and responded so well,” Arun told Indian Express in an interview.

When Kohli took over as full-time captain, Dhoni continued to guide him from behind the stumps in terms of sharing small and valuable inputs, changing fielding positions and mentoring the bowlers. During this time, India enjoyed considerable success in white-ball formats but couldn't lift the 2019 ODI WC title, bowing out in the semi-finals.

Dhoni was also part of Kohli-led Indian squad for the T20 World Cup 2021 edition, in the UAE, serving as the team mentor.

Speaking of the former Indian team head coach Ravi Shastri, Arun lavished praise on the ex-cricketer's tenure and said, "Fearlessness and honesty. During his tenure, there was absolutely no agenda. The decisions might have been right or wrong, that is irrelevant, but they came from the right place, purely thinking about team values and what we stood for as a team. Honesty encompasses criticism, self-introspection. It was in telling the team that ‘accept that we messed up’. It helped us evolve the team."

After the T20 WC, the Shastri-led coaching staff, including Arun and fielding coach R Sridhar, stepped aside from their respective posts. Vikram Rathour continues to hold his post, i.e. of the batting coach, whereas Rahul Dravid has replaced Shastri as Team India's coach till 2023.