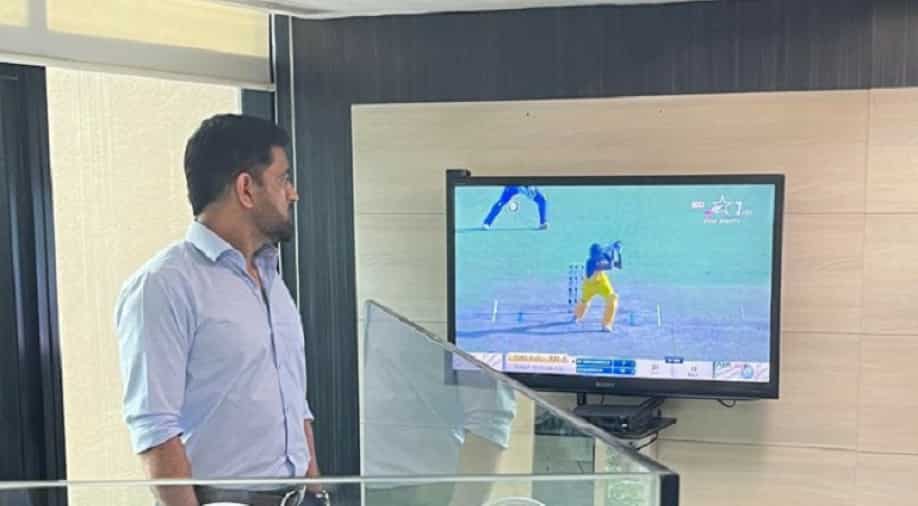 Tamil Nadu defeated Karnataka in a thrilling final on Monday (November 2022) to win the Syed Mushtaq Ali Trophy (SMAT) 2021. The final went down the wire as Tamil Nadu clinched a stunning four-wicket win on the final ball of the match with the help of a brilliant six from Shahrukh Khan.

Young batter Shahrukh played a sensational cameo of 15-ball 33 laced with three sixes and a solitary four to help Tamil Nadu chase down the target of 152 runs in the summit clash. Shahrukh displayed tremendous grit and composure under pressure during his match-winning knock.

Tamil Nadu needed five runs to win off the last ball and not many were expecting Shahrukh to go all out on the final delivery, however, he slammed a six over deep square leg off Prateek Jain's bowling to clinch the title for his team. Chennai Super Kings (CSK) shared a picture of their skipper MS Dhoni watching on as Shahrukh earned the 'finisher' tag with his memorable knock in the final.

Dhoni is considered as one of the greatest finishers in white-ball cricket having bailed India and his IPL team CSK out of trouble with the bat on several occasions. "Fini 𝙎𝙚𝙚 ing off in sty7e," CSK captioned the post with a picture of Dhoni enjoying Shahrukh's batting in the SMAT final.

Also Read: Ajinkya Rahane is fortunate he is still in India's Test side: Gautam Gambhir

Talking about the final, Tamil Nadu won the toss and opted to bowl first. R Sai Kishore was the pick of the bowlers for the side with a brilliant spell of 3/12 off his 4 overs. However, Abhinav Manohar's 46 off 37 balls and Praveen Dubey's 33 off 25 deliveries helped Karnataka post a challenging total of 151 runs on the board.

Tamil Nadu got off to a great start in the run-chase with openers Hari Nishanth (23) and N Jagadeesan (41) adding 29 runs for the first wicket. However, they lost wickets in a cluster in the middle-order to be left reeling at 95/4 in the 16th over. Shahrukh then produced a sensational cameo of 15-ball 33 to get them over the line.