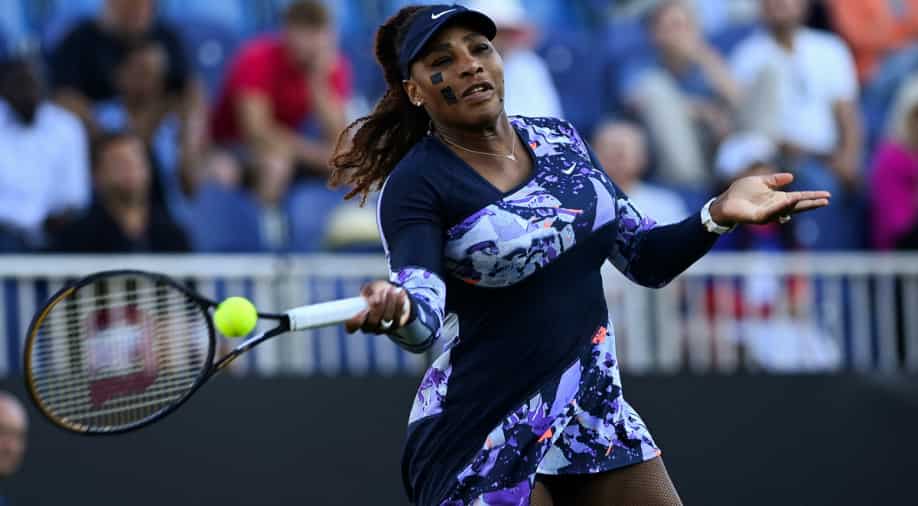 Serena Williams will make her comeback at Wimbledon 2022. Photograph:( AFP )

Indian tennis coach Nandan Bal opined on legendary Serena Williams' much-awaited return in the upcoming Wimbledon 2022. Bal said Serena might not be the favourite to win the title but will be difficult to beat.

Serena Williams is all set for a much-awaited comeback at the upcoming Wimbledon 2022. Williams will be heading into the competition as an unseeded wild card and will be playing her first singles match in a year as the action moves to grass court. The tennis great made her last singles appearance at the Wimbledon last year where she had to retire after injuring her right leg during her first-round match in the tournament.

Williams has not been in action for over a year but considering her pedigree in the competition, she has been backed by many to stage an upset at this year's Wimbledon. Williams, who is currently outside the WTA's top 1200, has played just two doubles matches at a tune-up event ahead of the start of the competition in England.

The 23-time Grand Slam champion is one of the most successful women's players of all time and has had an illustrious career spanning over two decades. Recently, Indian tennis coach Nandan Bal spoke exclusively to WION about Williams' return to a singles competition after a year at the Wimbledon.

While he insisted greats like Williams need just a couple of matches to go their way in order to find their mojo, she won't start as one of the favourites at the competition this year. Bal also believes Wimbledon 2022 can prove to be the final hurrah for Willaims, who is 40 already.

"Unfortunately yes (on this being her last hurrah), I would tend to think that at this point in time one could not say Serena would be a favourite to win the title. It will all depend on how her draw goes, like I said, these champions need only 2 to 3 good matches to get into their groove. Once they get into their groove, they are kind of unbeatable, especially in a big event," Bal told WION.

Williams could have been drawn against current world no.1 Iga Swiatek in the first round at Wimbledon 2022 or could have also potentially faced teenage Coco Gauff, who has been in terrific form recently. However, she will be up against France's Harmony Tan, an unseeded 24-year-old in the opening round which makes it relatively easier for the tennis great to plot a title challenge.

Nonetheless, Williams who has won the Wimbledon singles titles as many as seven times in her career will always pose a threat to the best in the business at the moment. Bal believes Williams can be difficult to beat if she can get past the second round but the other youngsters in the tournament will also be aiming to prove themselves.

"Someone like Serena, if she can get past the second or third round and gets into a groove, she is going to be difficult but age is certainly not favourable to her. The younger girls are not there just for the show, they are out there to prove themselves," said Bal.