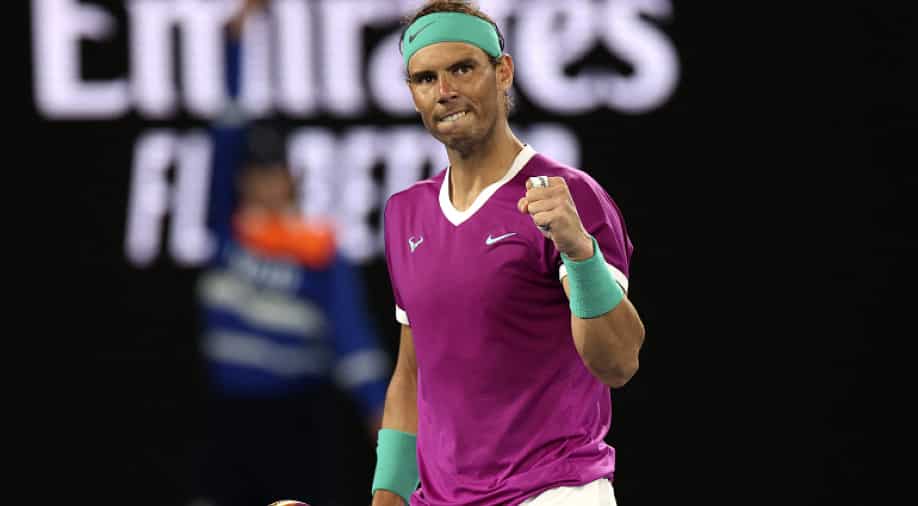 Rafael Nadal has enetred the final of the Australian Open 2022. Photograph:( AFP )

Rafael Nadal stands just one step away from creating history after defeating Matteo Berrettini in the semi-final of the Australian Open 2022 on Friday (January 28). The Spaniard has been in sensational form so far in the tournament and is eyeing a historic major title Down Under. Nadal defeated Berrettini 6-3 6-2 3-6 6-3 in what was a hard-fought semi-final encounter at the Rod Laver Arena.

Nadal got off to a brilliant start in the semi-final, taking the first set 6-3 against the big Italian before clinching the second set 6-2 in a dominant fashion. The Spaniard ended up making a double fault in the third set, his first of the day as Berrettini eventually managed to catch up.

Berrettini managed to turn a corner in the third set as he took three straight set points to bounce back and take the third set 6-3. However, Nadal's experience and his exceptional skills helped him turn the game in his favour in the final fourth set as he secured a place in the final.

Nadal, who is currently tied on 20 singles Grand Slam titles with rivals Roger Federer and Novak Djokovic, can move past the duo when he takes on the winner of the second semi-final between Daniil Medvedev and Stefanos Tsitsipas.

Nadal is aware of his final losses in the last four appearances but is grateful to have made it to yet another summit clash where he is aiming to give his best and go past rivals Federer and Djokovic, who are both not part of this year's Australian Open due to different reasons.

“For me, it’s all about the Australian Open more than anything else. It is just an amazing event that as I said a couple of days ago now, I have been a little bit lucky in my career with some injuries. At times I play good finals against Novak in 2012and Roger in 2017. I was lucky to win once in 2009 but I never thought about another chance in 2022. Just enjoy the victory today and after that try my best," said Nadal after his semi-final victory over  Berrettini on Friday.