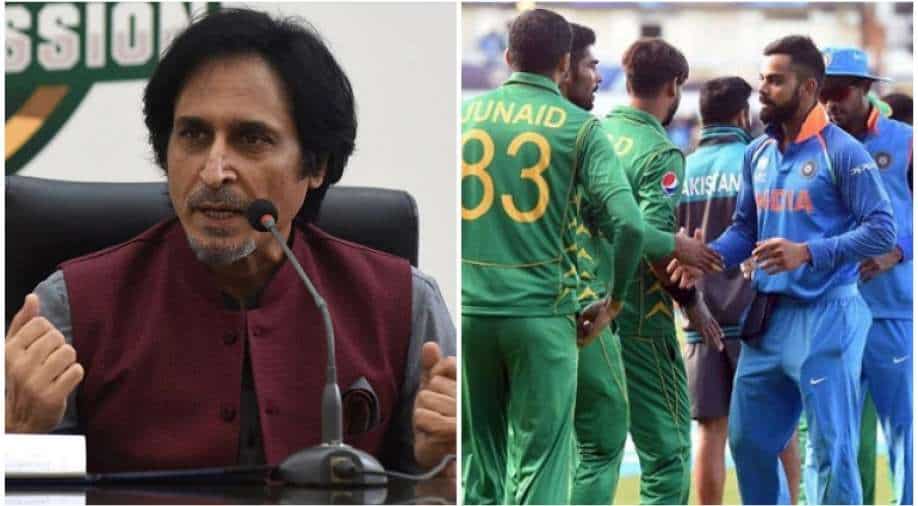 India and Pakistan have played each other only in ICC or ACC events since 2012. Photograph:( AFP )

Pakistan Cricket Board chairman Ramiz Raja is all set to table a proposal for a four-nation tournament involving India and Pakistan at the upcoming ICC Board Meeting but the BCCI is unlikely to play ball.

Pakistan Cricket Board chairman Ramiz Raja is all set to table a proposal for a four-nation tournament involving India at the upcoming ICC Board Meeting but the BCCI is unlikely to play ball.

As per the current ICC rule, a member board can host a tri-nation tournament at the most as only the global body has the right to organize an event which involves more than three countries.

But Ramiz's 'white-paper' proposes that ICC run the tournament annually with a projected revenue of USD 750 million for the parent body from media rights and other commercial activities.

India have been pencilled as one of the four participating sides in the four-Nations T20 Super League Series proposal, which Ramiz plans to table at the April 10 ICC Board meeting in Dubai.

Australia and England are the other participating sides in the proposal, which, if goes through, will see the Asian neighbours compete at the highest level on an annual basis.

The event host, the concept (white) paper says, will be decided amongst the four participants, with each participating side to stage the tournament on a rotation basis with ICC like its other global events running the tournament.

However, it has been learnt that BCCI is unlikely to relent.

"Our Futures Tours & Programme (FTP) is packed. Also the fact that there are lot of factors and as of now, there is no change in policy of playing them at ICC events. Also, we don't think ICC will be ready to organize a four-nation and Raja's proposal will be turned down," a senior BCCI official said.

India and Pakistan have played each other only in ICC or ACC events since 2012 when the last bilateral white-ball series was held.

Recently, BCCI secretary Jay Shah had stated in an interview to a foreign news agency that board is currently more focussed on honouring its bilateral commitments.

"The calender is choc-a-bloc and also we need to keep players physical and mental health in mind with so much of cricket being played,' the official said.

ALSO READ: WATCH: Commentators in splits as Babar Azam celebrates century while still on 99 in 2nd ODI vs Australia

According to proposal prepared by Ramiz, "the quadrangular series will be played on a single-league basis around September/October, which is a low cricket period due to the eve of cricket seasons in Australia, India and Pakistan, and the tail-end of the cricket season in England.

"The proposal suggests a potential revenue of USD 750 million, which the PCB boss wants to be distributed amongst the participating nations and other ICC members through a distribution model," a PCB source told PTI.

While Ramiz wants ICC to be the organizers of such an event, PCB sources feel that it will in no way undermine the global events.

"It is not an attempt to undermine the ICC Events or the ICC Events Cycle. The ICC tried the Super Series in 2005, so there is no harm in testing waters for another event," the source said.