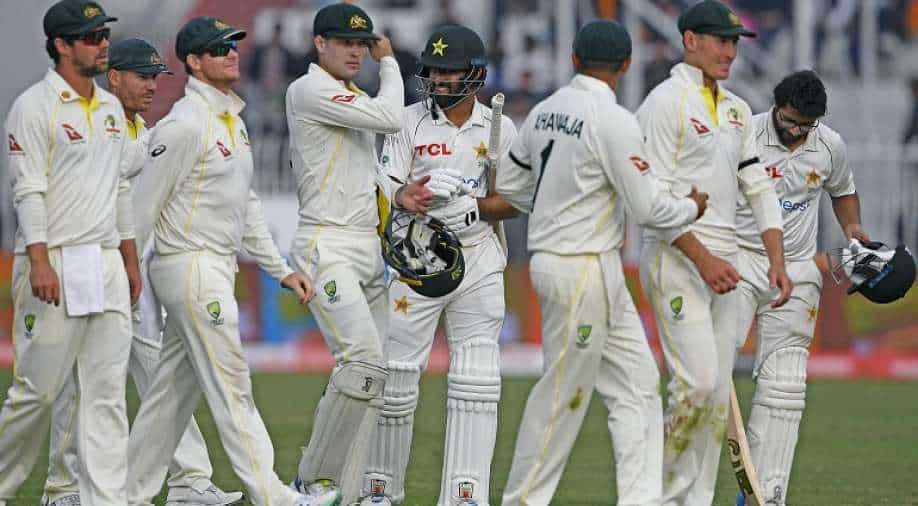 Players of Pakistan's and Australia's leave the ground after a draw in the first Test. Photograph:( AFP )

A total of 1,187 runs were scored over five days and only 14 wickets fell as the first Test between Australia and Pakistan ended in a draw.

Imam-ul-Haq smashed his second hundred in the run-fest in Rawalpindi but Australia's first test in Pakistan in 24 years ended in a dull draw on Tuesday.

Opting to bat on run-filled surface, Pakistan had made 476-4 before declaring their first innings at the Rawalpindi Cricket Stadium.

By the time they bowled out Australia for 459 on the final day, the chances of any team winning the contest had evaporated.

Pakistan decided to bat on allowing Imam, who went into the match without a century in his previous 11 tests, to score his second hundred of the contest.

His opening partner Abdullah Shafique, who made 136 not out, also brought up his maiden test century as Pakistan posted 252 for no loss in their second innings before the teams shook hands and left.

A total of 1,187 runs were scored over five days and only 14 wickets fell in what Australia's Steve Smith called a "pretty benign, dead wicket" which risks censure from the game's governing body.

With draw looming as the only possible result, Australia captain Pat Cummins shielded his frontline quicks and used as many as nine bowlers in Pakistan's second innings.

Earlier, after the tourists began the final day on 449-7, Pakistan took 11 deliveries to claim the last three Australian wickets.

Each of Australia`s top four batsmen crossed the 50-mark but could not convert them into hundreds and the tourists lost their last six wickets for 52 runs.

Left-arm spinner Nauman claimed a career-best 6-107 on a flat track where bowlers struggled for success.

When Pakistan came out to bat for a second time in the match, Cummins saw no point in straining his pace attack on the unresponsive track.

On Tuesday the pace trio of Cummins, Starc and Josh Hazlewood bowled a combined 16 out of their 77 overs.