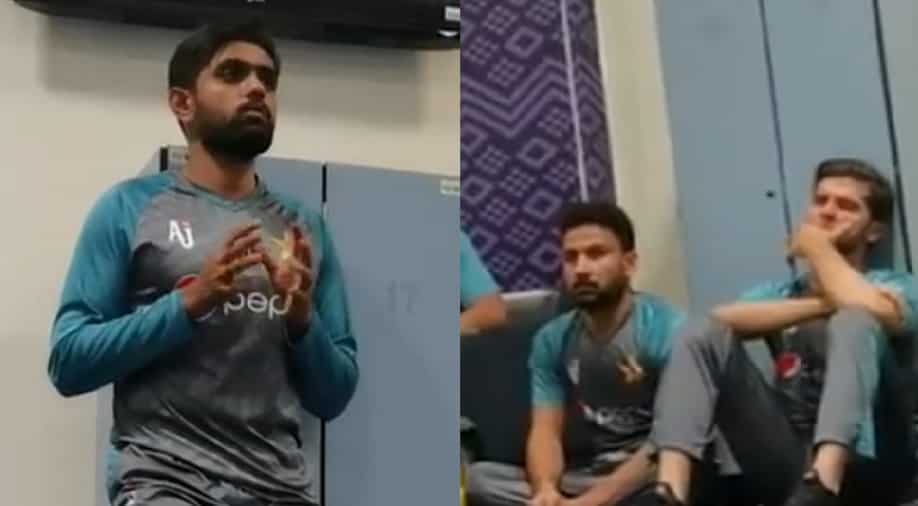 Pakistan captain Babar Azam delivered a reviting speech in the dressing room after his side bowed out of the T20 World Cup 2021 with a five-wicket defeat against Australia.

Pakistan's campaign in the T20 World Cup 2021 came to an end on Thursday (November 12) with a five-wicket defeat against Australia in the second semi-final. The Men in Green were on an unbeaten run of five matches heading into the clash but Australia brought a halt to their stellar streak as they secured a spot in the final where they will face New Zealand.

It was an enthralling battle between the two teams in the semi-final in Dubai as Pakistan went down fighting. Batting first, Babar Azam & Co. got off to a good start with an opening stand of 71 runs between Mohammad Rizwan (67) and Babar (39). Fakhar Zaman then slammed a brilliant 32-ball 55 to help the Men in Green post a challenging total of 176 runs on the board.

However, Australia rode on David Warner's 49 and crucial knocks of unbeaten 40 and 41 from Marcus Stoinis and Matthew Wade respectively to chase down the target with an over to spare. Pakistan's first defeat in the tournament resulted in their ouster from the competition.

Post the loss, Pakistan skipper Babar Azam gave a riveting speech in the dressing room and lauded his players for the character shown throughout the tournament. Babar also requested his players to avoid pointing fingers after the defeat and ensure the unity of the squad remains intact.

“Everyone is in pain and sadness as to what went wrong. Everybody knows where we went wrong and we have to learn from these games and situations and become better. The unit that we have here, should not be broken, and no one should point fingers at any player for their players for their performance," Babar said in the dressing room.

“There will be no negative talk, we will learn and hope not to repeat the same mistakes in the upcoming games. We have worked hard to make this team and build this unity, and one defeat should not affect it,” he added.

Babar Azam, Saqlain Mushtaq and Matthew Hayden are proud of their side despite a five-wicket defeat in #T20WorldCup semi-final. pic.twitter.com/kAem5PrWjj

Coaches Matthew Hayden and Saqlain Mushtaq among others were also seen applauding the players for their efforts after their exit from the tournament. Pakistan had dominated the group stages with five wins in five Super 12 matches including victories against arch-rivals India and New Zealand to finish on top of Group 2.