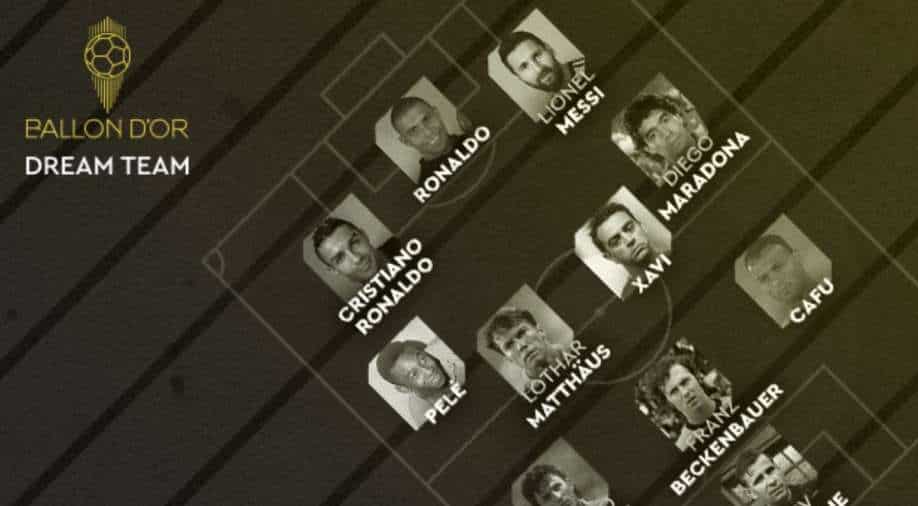 Lionel Messi and Cristiano Ronaldo have been selected as best right winger and left winger of all-time, by France Football magazine’s Ballon d’Or panel. The legendary duo of Diego Maradona and Pele were also picked in the Ballon d’Or Dream Team as right and left wide midfielders respectively in a team that boasts the greatest players of all-time.

Former Barcelona and Spain international Xavi was given the nod as best defensive midfielder ever alongside Lothar Matthaus. Eleven players were selected to complete the “Dream Team” with the panel of 140 experts going for an attacking 3-4-3 formation.

Brazilian great Ronaldo Nazario was picked as the greatest striker of all-time as he beat the tight competition to grab the spot in the Dream Team.

Following the cancellation of Ballon d’Or award for world’s best footballer due to the COVID-19 pandemic, France Football announced its best XI in the history of football, as voted by journalists from 170 countries and regions.

"For me, it is an honour to have been included in the eleven of the Ballon d'Or Dream Team. I want to thank you for choosing me and also congratulate all the players who were selected ... and all the nominees, there are real phenomena on that list," Messi, who has won the Ballon d'Or a record six times, said in an Instagram post.

Ronaldo Nazario, a two-time World Cup winner and dual Ballon d'Or recipient, also expressed pride at being named in the No. 9 position.

"It's such an honour to be elected the best centre forward of all time in the Dream Team by France Football," Ronaldo said on Instagram.

"I gave my life for football and followed my dreams. No matter the obstacle I faced and the pain I had to overcome I was always focused to get where I wanted," he added.

Juventus star Cristiano Ronaldo, who has won the Ballon d'Or five times, said: "I'm very honoured to be part of France Football's all-time 11. What an amazing Dream Team. They all deserve my respect and admiration and I'm obviously proud to be amongst such extraordinary players. Thank you!"

⭐After the votes of 140 journalists from all around the world, here is the #BOdreamteam with 11 best players of all time ! ⭐ pic.twitter.com/FsKAoSyGZL