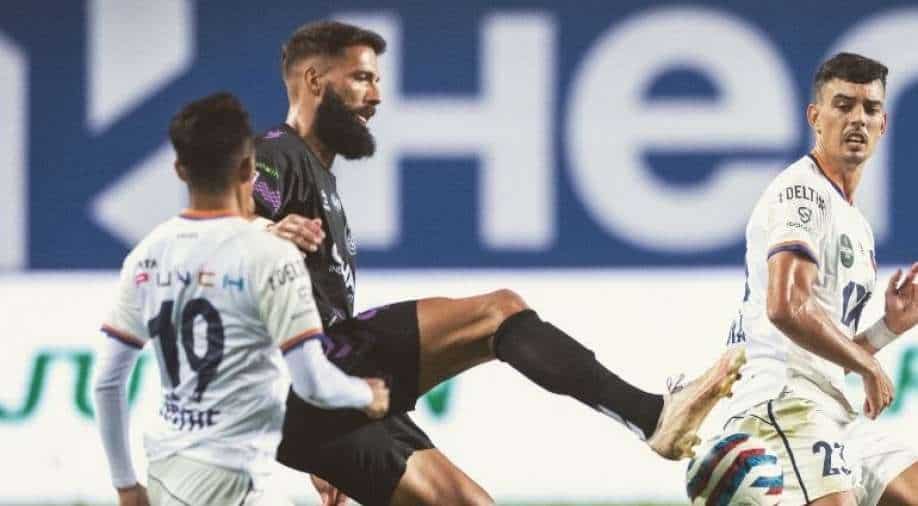 The Gaurs will be back in action on December 29 when they take on their former head coach Juan Ferrando and ATK Mohun Bagan.

FC Goa started off the Derrick Pereira era with a 1-1 draw against Odisha FC in an Indian Super League game here on Friday.

In a game of two halves, the Gaurs saw themselves take the lead thanks to an Ivan Gonzalez goal before being pulled back in the second half when Odisha struck through their Brazilian striker Jonathas.

Pereira, in his first game as FC Goa head coach decided to go for an unchanged XI with Edu Bedia again leading the side. The former Indian international was without the services of Glan Martins, Brandon Fernandes and Jorge Ortiz owing to injuries and suspensions.

Kiko Ramirez, on the other hand, rang in five changes to his side with a view to bring to end Odisha's recent slide down the table which has seen them lose three of their last four games.

Their plans had to be altered as Airam Cabrera had to be taken off early with Nongdamba Naorem replacing the Spaniard.

The first big moment in the game came in the 26th minute as the Gaurs worked the ball well to get in a threatening low cross from the right.

After a skirmish in the crowded penalty box, Alberto Noguera was able to eke out space before delivering a low short which Kamaljit Singh did well to save, going down low to his left.

A few minutes later it was Aibanbha Dohling creating issues for the Odisha defence as the centre-back rose highest from a corner, but failed to keep his header on target.

Noguera was back at it again a few minutes later as the Spaniard was played in beyond the Odisha defence by a delightful ball from Saviour Gama.

The midfielder looked on track to score his third goal of the season before Kamaljit pulled off another brilliant reaction save to keep Derrick Pereira's men at bay.

The breakthrough finally came in the 42nd minute through a corner kick. Ivan Gonzalez came up with his first of the season, getting on the end of a freekick from the left after Dohling did well to flick it on at the near post.

FC Goa came out the stronger of the two sides following the break. However, against the run of play, Odish equalised.

Jonathas made the most of his physical prowess as he bundled the ball over the line in the 53rd minute after a deflected cross from the left by Nandhakumar caught out the Gaurs' defence.

Odisha continued to build on the momentum from the goal and nearly took the lead in the 72nd minute.

Another cross from the left, this time off the boots of substitute Aridai Cabrera saw Dylan Fox hit the crossbar of his own goal as the Aussie looked to clear his lines. Liridon Krasniqi was first to the rebound. However, his shot was headed off the line by Ivan Gonzalez to keep the game on level terms.

The final phase of the game was characterised by both sides going for the kill as it became an end to end affair.

And it was Odisha who had the best opportunity of the game as Jonathas drew a tired Goa defence before playing in Krasniqi on the left. The Malaysian looked to curl the ball into the goal but was interrupted by a magnificent diving save by Dheeraj Singh.

The Gaurs will be back in action on December 29 when they take on their former head coach Juan Ferrando and ATK Mohun Bagan. That game is set for a 7:30 pm kick off.