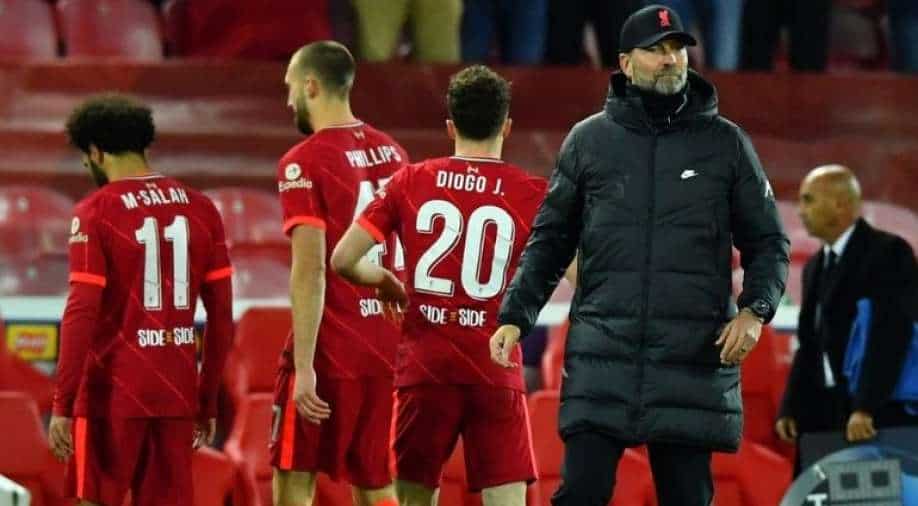 The number of Premier League games called off due to COVID-19 outbreaks is now up to 12 in the last two weeks but the League said it was their intention to continue playing fixtures "where safely possible".

COVID-19 cases in the visiting teams have forced the postponement of the Liverpool v Leeds United and Wolverhampton Wanderers v Watford games scheduled for Boxing Day, the Premier League announced on Thursday.

The number of Premier League games called off due to COVID-19 outbreaks is now up to 12 in the last two weeks but the League said it was their intention to continue playing fixtures "where safely possible".

"Following postponement requests from Leeds United and Watford as a result of COVID-19, the Premier League Board met this morning and regrettably agreed to call off the two affected clubs' Boxing Day fixtures," it said in a statement.

"The Board today was able to make its decisions in advance of Boxing Day to give clarity to clubs and their supporters. We apologise for the inconvenience and disruption caused to those fans` festive plans."

The League said Leeds would have been unable to fulfil the fixture due to a number of players with COVID-19, injuries and illness.

Leeds said all the COVID-19 cases they have experienced are asymptomatic. The club`s training ground will be closed for two days on the advice of Public Health England.

Watford, who have already had two games called off this month, continue to have an insufficient number of players to field a team, the League said.

"Due to players coming out of isolation, it is fully expected Watford will be available for their fixture on Tuesday 28 December, against West Ham United," the League added.

The Premier League only grants a postponement if a club has fewer than 14 players available, with the board examining requests on a case-by-case basis.

Clubs such as Chelsea have had requests to postpone games rejected. Leicester City also had a request rejected before the League had no choice after more players and staff tested positive on the day of their game against Tottenham Hotspur.

The situation is worse in the lower divisions with four second-tier Championship games scheduled for Boxing Day postponed due to COVID-19 cases while 11 games in League One and League Two were also called off.