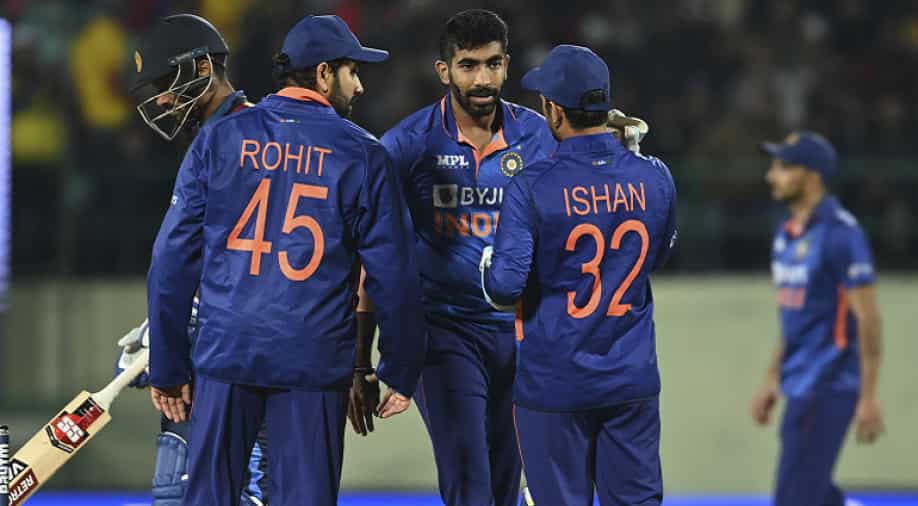 India will aim for a 3-0 clean sweep against Sri Lanka in the 3rd T20I on Sunday. Photograph:( AFP )

With Ishan Kishan set to miss the game due to an injury, here is a look at India's predicted playing XI for the third and final T20I against Sri Lanka on Sunday.

Rohit Sharma-led Team India will be aiming to pull off their third successive T20 series clean sweep in a row when they take on Sri Lanka in the third and final T20I of the three-match series on Sunday (February 27). India defeated Sri Lanka by seven wickets in the second T20I at the HPCA Stadium in Dharamshala on Saturday to take an unassailable 2-0 lead in the series with back-to-back wins.

Shreyas Iyer, Ravindra Jadeja and Sanju Samson were the stars of India's victory as the trio played brilliant knocks with the bat to power India to a comprehensive win. Asked to chase down the target of 184 runs in 20 overs, India rode on Iyer's 44-ball 74 and crucial knocks of 39 and 45 runs from Samson and Jadeja respectively to wrap up the run chase with 17 balls to spare.

India will be looking to continue their winning run in the third T20I. However, the hosts have received a major setback ahead of the final game as wicket-keeper batter Ishan Kishan suffered a head injury while batting during the second T20I and is likely to miss the clash.

Kishan was hot on the helmet by a vicious bouncer from Lahiru Kumara while batting and suffered a head injury. He was taken to hospital for scans and is unlikely to take the field in the 3rd T20I. In his absence, backup opener Mayank Agarwal can be asked to open the innings with Rohit in the third T20I. Samson will keep the wickets and will continue to bat at number four.

With Jadeja back in the squad and finding his groove, he will continue to bat up the order while all-rounders Venkatesh Iyer and Deepak Hooda will continue to don the finisher's role for the team. There is no change expected in the bowling department with Jasprit Bumrah, Bhuvneshwar Kumar and Harshal Patel comprising the pace attack. Yuzvendra Chahal will keep his spot as the lone spinner in the side.