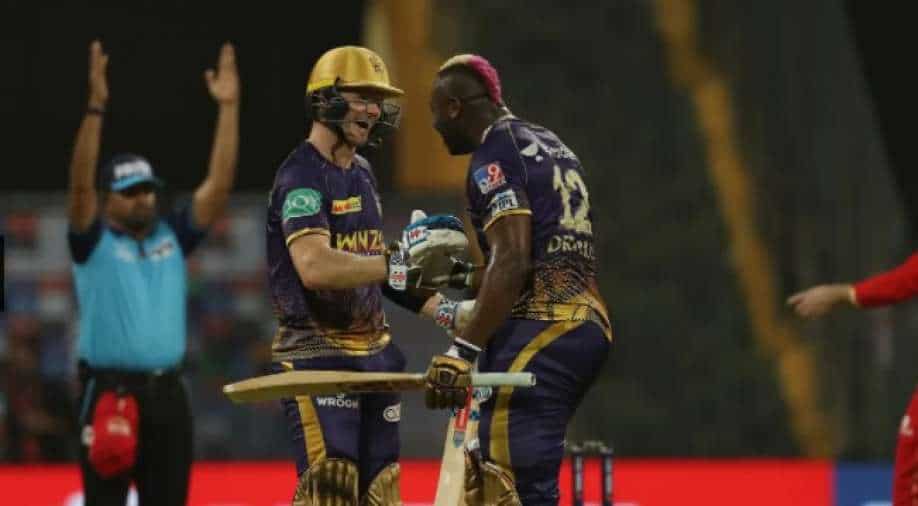 Russell (70 not out off 31 balls) came out in the middle and changed the game with his barrage of sixes, eight in total, to make it a cakewalk in just 14.3 overs.

Umesh Yadav continued his dream run with a four-wicket haul before Andre Russell returned to his brutal best to fire Kolkata Knight Riders to an easy six-wicket win over Punjab Kings here on Friday.

Umesh (4/23), coming into the season with just two games over two IPL seasons and going unsold initially at the auction, produced career-best T20 figures to help KKR dismiss Punjab for a below par 137 in 18.2 overs.

It was supposed to be a straight forward chase but Rahul Chahar raised Punjab's hopes with a double wicket maiden to reduced KKR to 51 for four.

However, Russell (70 not out off 31 balls) came out in the middle and changed the game with his barrage of sixes, eight in total, to make it a cakewalk in just 14.3 overs.

He smashed three sixes off Odean Smith in an over that went for 30 runs. No rope is long enough when Russell is going all guns blazing and he was in that kind of zone on Friday night.

The Jamaican dasher fittingly ended the game with a couple of sixes off Liam Livingtsone's friendly leg-breaks. It was KKR's second win in three games while Punjab suffered their first loss of the season after the win over RCB.

Earlier, KKR bowlers stifled a power-laden Punjab Kings batting line-up. With heavy dew setting in later half of the games, fielding first has become a no-brainer this IPL and KKR skipper Shreyas Iyer called it right at the toss.

Punjab, which had successfully chased 200 plus in their opening game, enjoyed a good powerplay that yielded 62 for 3 in six overs. Veteran pacer Umesh, who has been proving his critics wrong this season., once again provided the breakthrough early in the game, removing opposition skipper Mayank Agarwal, who was found plumb in front after missing a rather straight and full delivery in the first over of the match.

Sri Lankan Bhanuka Rajapaksa (31 off 9) who had produced a match-winning knock in the first game, looked in sensational touch at the Wankhede Stadium.

In his brief stay in the middle, the top-order batter hammered three fours and as many sixes, mostly towards the mid-wicket region, leaving the spectators in awe. His breathtaking effort was perhaps the lone bright in an otherwise underwhelming innings. Iyer impressed with his leadership.

He brought back Umesh in the middle overs to ensure there was no fightback from Punjab. He also employed a slip in the 15th over and was rewarded for that with the wicket of Rahul Chahar.

His new ball partner Tim Southee and KKR's retained spinners Varun Chakaravarthy and Sunil Narine were also too good for the Punjab batters. Livingstone (19 off 16) could convert his start while India U-19 star Raj Angad Bawa found the going tough for the second game in a row. Kagisa Rabada (25 off 16), playing his first game of the seasons, saved Punjab the blushes by getting much needed boundaries to take the total close to 140.