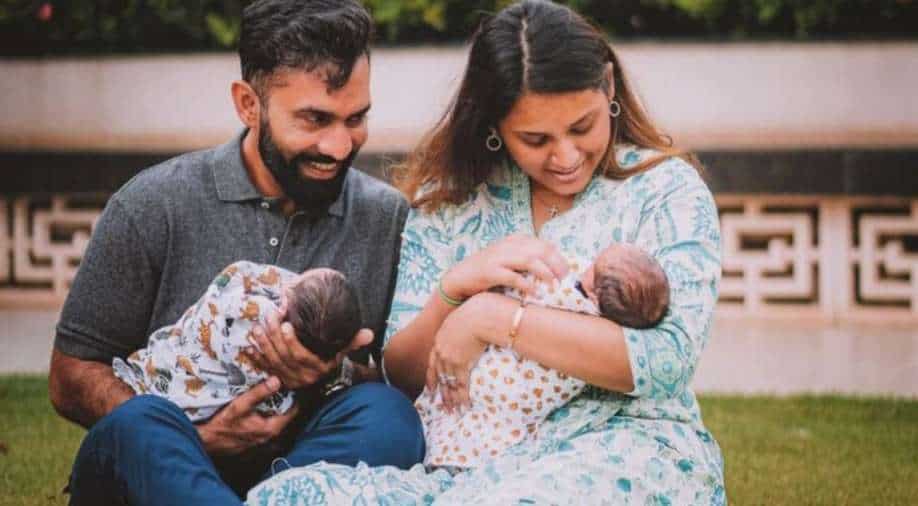 In 2015, Karthik tied the knot in traditional Hindu and Christian ceremonies with Dipika, who is an Indian professional squash player

Indian wicketkeeper-batter Dinesh Karthik and his wife Dipika Pallikal announced on Thursday (October 28) the birth of their twin boys. Taking to official social media handle, the cricketer shared adorable pictures with his wife and the newborns.

"And just like that 3 became 5 Dipika and I have been blessed with two beautiful baby boys Kabir Pallikal Karthik Zian Pallikal Karthik and we could not be happier," Karthik wrote as the caption of the post.

and we could not be happier ❤️ pic.twitter.com/Rc2XqHvPzU

The good was also shared by the official handle of the IPL franchise Kolkata Knight Riders (KKR), as the team wished the couple. "Big, big congratulations to @DineshKarthik and @DipikaPallikal on becoming parents of two beautiful twin sons - Our Knight Riders' family just got a little 𝘵𝘸𝘰 bigger!" Twitter handle of KKR posted.

In 2015, Karthik tied the knot in traditional Hindu and Christian ceremonies with Dipika, who is an Indian professional squash player. She is also the first Indian to get into the top 10 of the official women's squash world rankings. She is a multiple Asian Games and Commonwealth Games medal-winning athlete.

Whereas, Karthik was last seen in action in the recently-concluded Indian Premier League (IPL) 2021 season with KKR.