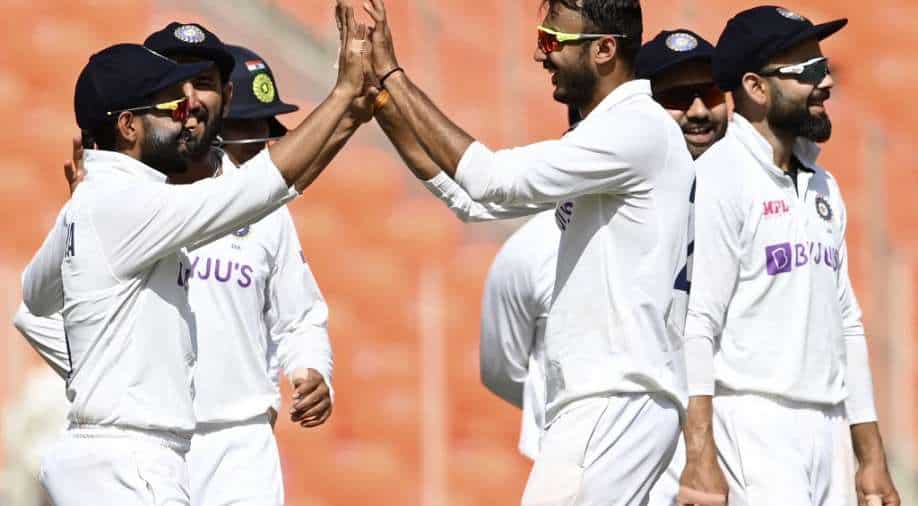 Despite winning the toss first, England were bowled out on 205 on Day 1 of the Test with Ashwin and Axar picking up seven wickets. England all-rounder Ben Stokes top-scored with 55 and returning batsman Dan Lawrence made 46.

Team India handed England an innings defeat on Day 3 of the fourth Test at the Narendra Modi Stadium on Thursday. With this win, India go on top of the ICC Test rankings, as well as, booked their berth in the World Test Championship finals.

Despite winning the toss first, England were bowled out on 205 on Day 1 of the Test with Ashwin and Axar picking up seven wickets. England all-rounder Ben Stokes top-scored with 55 and returning batsman Dan Lawrence made 46.

Virat Kohli and Co. are No.1 in the @MRFWorldwide ICC Test Team Rankings 🔥 pic.twitter.com/uHG4q0pUlj

In reply, India were off to a bad start as  Gill was dismissed on the very third ball. On Day 2, India were down to 80 at the loss of four wickets, when Rishabh Pant stepped in to save the day for the hosts. Pant's century and Washington Sundar's unbeaten 96  powered India to 365 on Day 3.

India took a 160-run lead before being bowled out. England's batting woes continued as they were 91-6 at tea. Off-spinner Ravichandran Ashwin reduced England to 10-2, dismissing Zak Crawley and Jonny Bairstow with successive deliveries. Bairstow fell for his third duck in four innings.

That victory against England means India finish the league phase of the inaugural ICC World Test Championship with a fine view from the top of the table 🔝#INDvENG | #WTC21 pic.twitter.com/rXFiKPXdB7

Dom Sibley fell for three in a bizarre manner, sweeping Axar Patel into Shubman Gill's body at short-leg with Rishabh Pant taking the catch after the ball ballooned up.

Dan Lawrence's brave 50 could not save the game for England as the hosts were bowled out 135 runs, giving an innings and 25 runs win to India.

India and New Zealand will face each other in the World Test Championship at Lord's.