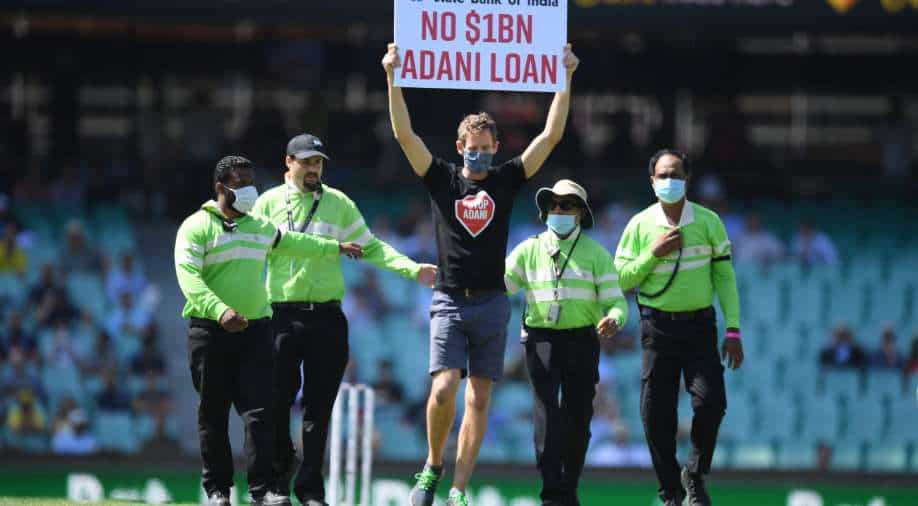 Two protestors on Friday barged into the Sydney Cricket Ground, where the first ODI between India and Australia is being played. The protestors carried placard against Adani Group which read “NO $1B ADANI LOAN”.

Two protestors on Friday barged into the Sydney Cricket Ground, where the first ODI between India and Australia is being played. The protestors carried placard against Adani Group which read “NO $1B ADANI LOAN”.

The front of the protestors’ T-shirt displayed “StopAdani” while the back read “Stop Coal”. #StopAdani Take Action.”. The protestors during India vs Australia 1st ODI were denouncing India’s Adani Group’s coal project in Australia.

Stop #Adani protest at the cricket - calling on State Bank of India not to fund Adani's Australian coal mine to the tune of $1 billion (following recent media reporting that this deal is currently underway) #AUSvIND https://t.co/KBORZ7gXKJ

One of them intruded into the stadium and ran close to the pitch when Indian pacer Navdeep Saini was gearing up for his run-up to the bowl the sixth over of the Australian inning.

BREAKING: Brave cricket fans and #StopAdani supporters have disrupted play at the #AUSvIND Cricket match to draw attention to a potential $1B loan of Indian taxpayers’ money for Adani’s climate wrecking coal mine. Tell @TheOfficialSBI to stop the loan to billionaire #Adani! pic.twitter.com/ibf3hpESdY

ALSO READ: Australia rate Will Pucovski highly but he may need to bide his time: Justin Langer

The duo was taken out by the security. Surprisingly, the security looked slow and rusty and took time before intervening – raising question marks over the security arrangements for the high-profile series.

Stop Adani protesters run onto the field and stop play.

Security took about five minutes to realise they were trespassing and weren’t players. #AUSvIND pic.twitter.com/wLBgdeLlqu

“We’ve got a couple of pitch invaders protesting about something,” Adam Gilchrist said on Fox Sports. “We’ll wait for security to come and get them and remove them. We don’t see any urgency from security at the moment.”
Some protestors, going by the name Stop Adani, were spotted outside the Sydney Cricket Ground before the match started.

“Millions of Indian taxpayers who are watching the first game of the Indian cricket tour have a right to know that the State Bank of India is considering handing their taxes to a billionaire’s climate-wrecking coal mine,” a statement from Stop Adani read.

Cricket Australia has allowed entry of supporters in half-capacity for the ODI series with SCG operating at 50 per cent.