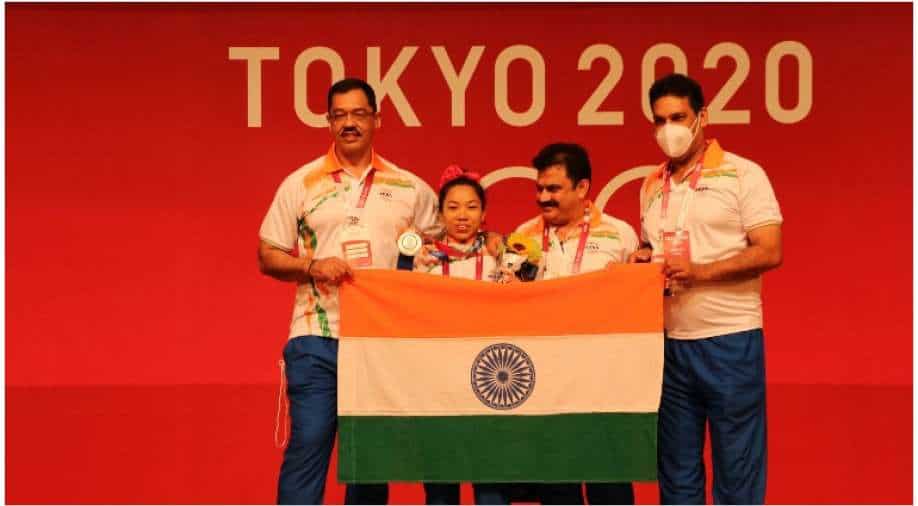 Following Mirabai Chanu's silver at Tokyo 2020, her coach Vijay Sharma spoke at length and shared the hardships and overall journey of the entire team in ensuring a podium-finish for the athlete in Tokyo, Japan. Here are the excerpts:

Firsts are always special. Weightlifter Mirabai Chanu won India its first-ever medal at the Tokyo 2020, by securing a silver in the 49kg category. It was the start of something special for Team India, who went on to end with as many as seven medals to return their best-ever showing at an Olympics.

Thus, she fulfilled her family’s and her dreams. She also made her entire team, which was beside her at all times and had worked tirelessly to ensure her a podium-finish, extremely proud. Vijay Sharma, Mirabai's and India's national weightlifting coach, was also beaming with pride seeing his protégé stand on the podium as she also fulfilled his long-standing and unfulfilled desire.

For the unversed, Vijay joined as the national coach in 2012. However, the first chapter of his journey as an athlete  was penned down long back. The man from Modinagar, near Meerut, didn't have a glittering resume but won as many as seven medals -- including a gold -- at the national championship. However, an Olympic medal eluded his cabinet before Mirabai scripted history. Thus, while Vijay cannot brag of an Olympic medal as an athlete, he is now living his dream in through her success.

WION News' Aditya Sahay got chance to interact with Vijay Sharma as the veteran coach shared his journey with Mirabai, the hardships and sacrifices seen together and future of weightlifting in India. Here are the excerpts:

Q) Being a former athlete, how did you feel when Mirabai Chanu secured silver at Tokyo 2020? What was the initial feeling?

Being an athlete and now a coach, it was such a moment that cannot be described. If you are not able to do something in life, you hope and expect that is achieved by your child. These athletes are my children only. So I cannot really put this in words as to what and how I actually felt. After Rio 2016 and the Tokyo Olympics being pushed by a year due to Covid-19, the wait was a long one but eventually turned out to be worthwhile.

Q) Surely, the process must've been tough. Over the years, you're believed to have made sure the relationship between athletes-coach remained solid and the diet and overall fitness weren't compromised at any cost. What was your initial plans when you stepped up as the national weightlifting coach in 2012?

During my stint as an athlete, staying in national camp from 1993-2000, I gave plenty of trails and failed many a times. Back then, I realised what all are essential for any player in his, or her, journey. That phase taught me many things. Thus, I started with a lot of changes as a state coach in 2001. I tried and tested a lot of things in my initial days. We won the state junior championship on three successive occasions, which propelled the federation to invite us and work with the national team.

Since joining the national team, I realised the same issues are still existing in the federation in terms of training regime, diet plans, fitness etc. Slowly and steadily, I started seeing the changes and understood the progress is now happening. My personal experience taught me a lot. Earlier the culture and concept was that running fitness isn't that important in weightlifting. It took time but I tried to inculcate such changes and look after the overall fitness in every aspect.

I worked on athletes' diet plans, fitness and to build a trust and communication with the players. You need to sit and spend time with them, on and off the field. Only then will they respond and work with you in a desired manner. See, national champions won't listen to you at once. He, or she, will feel they are already very good so one needs to win their trust so that the communication and respect is intact. After all this was formed, we started marching ahead in big events and the confidence and momentum just kept on building continuously.

Q) What were the hardships Mirabai-Vijay Sharma and team went through over the years, enroute Tokyo silver?

I've worked a lot with these players. All of them, not only Mirabai, have sacrificed a lot. Mira was contemplating quitting the game, especially after what transpired in Rio 2016. The following 2-3 months was very tough to motivate and force her way back. After her record win in 2018 Commonwealth Games (CWG), her back injury forced us to stay in Mumbai for long for medical treatment so that was another big jolt coming our way. To top it all, Mira didn't even attend her own sister's wedding. From Rio 2016 onwards, she must've visited her hometown for only 12-14 days maximum. Even I haven't met my close friends for years. You don't get to visit families on occasions and festivities, which doesn't come out in the open but is tough for every athlete.

Thank you my coach Vijay Sharma sir and team for all the hardwork. pic.twitter.com/CwBfqOJBws

Q) Is it true that you missed out on several family gatherings and festivities over the years. How tough was it and how did your family support you?

I continued to play at the national level even after marriage. So every new member of the family knew that my life isn't the same. However, my family has always supported me wholeheartedly. No one can move an inch ahead or succeed in their field sans family support. I've my home in Ghaziabad. It isn't very far from the camp (in Patiala). But I never travelled back home. I wasn't home even for Karwa Chauth or any other festival to follow the same rules which were applicable to the athletes. It didn't feel right to visit my family when my children (i.e. the athletes) remain in the camp.

One needs to set the example and abide by it for others to follow suit. These are my children. Any birthday or festival, we get together and celebrate as much as we can....so that we can treat each other as a family away from home.

Q) Is it easy when the coach has also won medals, like you have, and represented the nation? Does the method become slightly easier?

Depends on the inner soul. There were many good or great players with me during my national camp days. I wasn't the best, but that doesn't mean a good athlete will be a good coach. It all depends on how your mind is reacting and how confident you are from within.

Q) In India, we shower athletes with praises when they succeed and criticise them sharply when they're down. Do you feel the attention given, though much-deserved, becomes a bit too much afterwards? Should the focus, instead, remain on the road ahead?

If we compare ourselves with China, we are still far behind in terms of the overall inclination we've for weightlifting. To date, parents are reluctant to invest their ward's career in other diverse fields. The government is doing its part and even the media isn't wrong here. The thought process of the common citizens have to change and not just think about the medal-winners for 2-4 months but emphasise for a longer period. Hence, a chain will be formed where we will get a lot more talent for every sport. There is no dearth of talent in India for any field. If sports culture widens nationwide, it will help our country to develop further as well.

Q) Paralympics athletes have crossed double figures in the medal tally as we speak. Do you think time is ripe for India to invest heavily on athletics and various other field events, and not remain a cricket-centric country?

Yes, last time also they'd (para-athletes) inspired us. They showed us the way after our Rio 2016 campaign too when we felt down. They always show us to never give up. They have their shortcomings but still don't know how to go down without giving a serious fight. Hence, what is stopping us? This time around too, they're winning hearts all over.  Also, the government needs to be credited for their efforts and involvement. I've never seen such amount of help from any government. Once, we were sent to the USA in a day after all the arrangements were put in place.

Thus, hopefully in the next Olympics we will return back with 25 medals.

Honoured to meet and interact with our Honourable Prime Minister @narendramodi sir. pic.twitter.com/nUj1cnk33S

Q) Apart from Mira, whose performance has impressed you the most? You can even mention among the lot that won hearts but no medals.

Mira was impressive. We all believed she will return with a medal and she proved us right. She lived upto expectations. Among others in individual sports, Neeraj Chopra was superb. I didn't expect that from him but he left me completely stunned. On the other hand, the women's hockey -- infact the entire hockey contingent -- and their performance was praise worthy, to say the least. From moving to the fourth spot after ending last in Rio 2016, Rani Rampal & Co. deserve all the applause and praise.