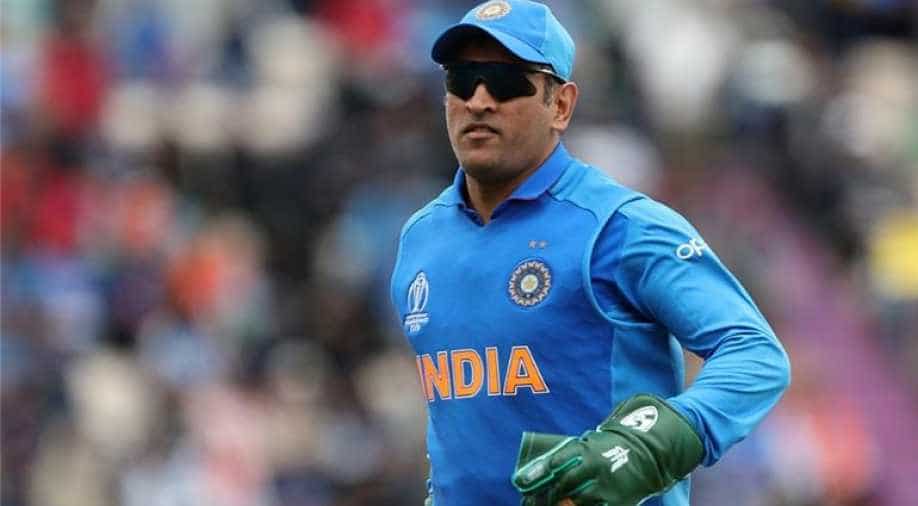 During India's opening World Cup game against South Africa in Southampton, Dhoni's green keeping gloves had a dagger logo embossed, which looked like an Army insignia.

It was well appreciated by the Indian fans but the International Cricket Council(ICC) requested the BCCI to have the badge removed, saying it is against its regulations.

Twitter exploded with tweets in support of Dhoni sporting the gloves, with politicians, Bollywood celebrities and fans tweeting.

'#DhoniKeepTheGlove' has been the top trend on Twitter since the Indian cricket board (BCCI) said it stands firmly with Dhoni against ICC’s direction to remove the Army crest.

Indian Army has always been independent irrespective of the political party in power. We are proud of them. Lt. Col. @msdhoni has worn the Army insignia as a symbol of pride. Doesn’t hurt anyone’s sentiments, In fact it honours the brave #DhoniKeepTheGlove #WorldCup2019

Claire Furlong, ICC General Manager - Strategic Communications had objected to Dhoni insignia, saying on Thursday: "It is against the regulations and we have requested it is removed."

Furlong had added that it was a "request" for removal and not a "breach".

Committee of Administrators (CoA) chief Vinod Rai confirmed that BCCI has written a letter to the International Cricket Council seeking permission for Dhoni to wear the gloves with the army badge.

"The BCCI had already sent a formal request to the ICC for clearance. As per ICC regulations, players can't sport any commercial, religious or military logo. There was nothing commercial or religious in this regard as we all know," Rai told news agency PTI.

"And it is not the paramilitary regimental dagger that is embossed in his gloves. So Dhoni is not in breach of ICC regulations," he added.

Mahendra Singh Dhoni will continue wearing the dagger insignia on his wicket-keeping gloves as it is not a military symbol, Rai said.

We loved you but we now respect you like no other #dhonikeeptheglove pic.twitter.com/YYwW10j4mk

If it is not against the ICC norms then why they are insisting him ?

Dhoni, It's a matter of National pride.
Dhoni, Keep the BALIDAAN badge.
Dhoni, India Back your Glove.#dhonikeeptheglove

#DhoniKeepTheGlove
Dhoni is playing for his country and rightly as the honary Lt.Col of his regiment he has the right to express his loyalty Futher the symbol is not representing any commercial organisation. With Dhoni pic.twitter.com/srrTMCOJ3i

Rahul Johri, the BCCI CEO will be reaching England before the Australia game and will be speaking to the senior ICC officials.