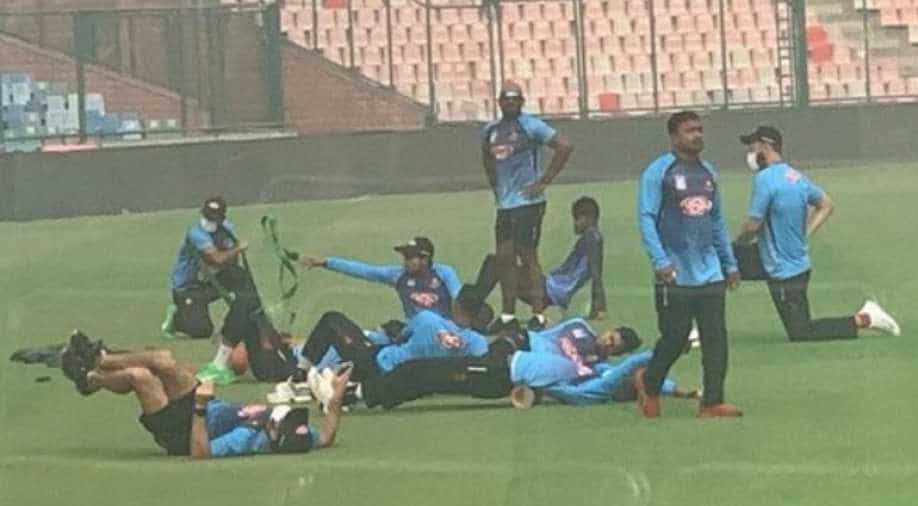 Bangladesh and India are all set to play the first T20I of the three-match series here in Delhi on Sunday, November 3.

As concerns over pollution in the national capital continues to grow, Bangladesh`s players were seen training wearing marks at the Arun Jaitley Stadium on Friday.

Bangladesh and India are all set to play the first T20I of the three-match series here in Delhi on Sunday, November 3.

The air quality in Delhi continues to deteriorate and it has slipped into the `severe` category in several places across the city.

This has led many to urge the BCCI to shift the match from Delhi.

When ANI contacted the Bangladesh Cricket Board (BCB), a source replied: "It is up to the players, if they want to use the mask they can, it is their choice".

On Thursday, Bangladesh's batsman Liton Das was seen training with a mask on, while others like Mushfiqur Rahim and Mustafizur Rahman were seen without masks.

But on Friday, the situation seems to have changed as many Bangladesh players opted to train with masks.

However, when Liton Das was asked why he chose to wear a mask during training, the batsman replied: "I had some personal problem that`s why I was wearing it. I was not feeling well".

"I have just landed and didn`t get the time to see/assess what it`s like in Delhi. The information I have is that the match is scheduled for November 3 and it will happen on the same day," he had said.

Earlier, the BCCI President Sourav Ganguly confirmed the match will go on as planned in the national capital.

"We have spoken to Delhi authorities in the last two days. They are expecting the match to go through but it was already scheduled so we could not cancel it at the last minute. We came in on October 28 and it was too late to do anything because a lot of preparations go in matches; tickets, crowd, and everything. So it is not possible to cancel things in the last minute," Ganguly had said.