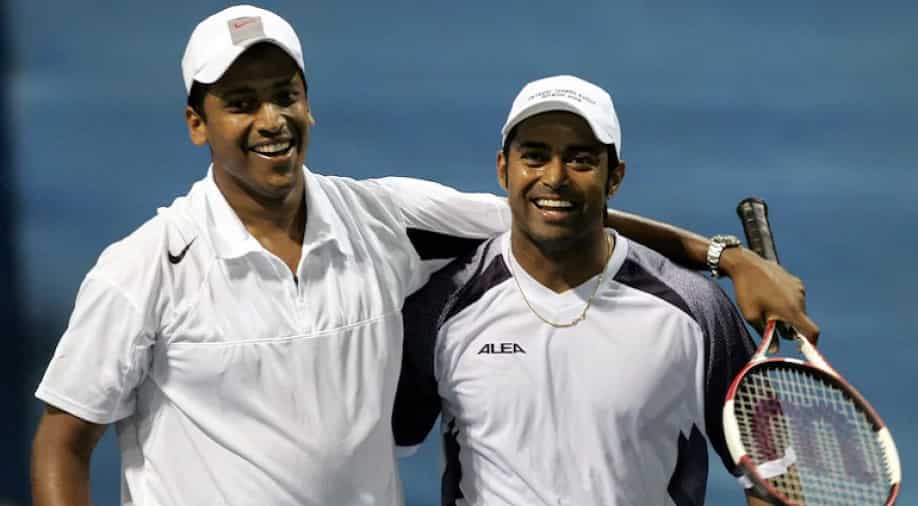 India's tennis greats Leander Paes and Mahesh Bhupathi enjoyed tremendous success, winning 30 Grand Slams between them in their eventful careers. However, their strained relationship remained a talking point throughout their entire career. The duo give fans an insight into what went wrong in the upcoming documentary 'Breakpoint'.

Mahesh Bhupathi doesn't mince his words one bit when told his name along with Leander Paes' is synonymous with controversies in Indian tennis.  "If it's just a happy story nobody wants to tell it," he says. One of the most successful Indian tennis players of all time, Bhupathi dominated world tennis with Paes in the late 90s and the early 2000s.

The duo was the first Indian pair to win the Wimbledon doubles title in 1999 before they had a fallout in 2000. Nonetheless, the champions never let their strained relationship affect their performances on the court as they kept on winning and scripting major feats to create an enviable legacy in Indian tennis.

As the two tennis greats come together to portray their journey to stardom and give fans an insight into their controversial yet successful professional relationship in the upcoming documentary - 'Breakpoint', Paes and Bhupathi spoke exclusively to WION's Digvijay Singh Deo. In the candid interaction, Bhupati did not mince his words when he said nobody wants to hear stories with a happy ending but those with controversies in it.

"I was jokingly telling Leander when we met for the first time at the shoot a few weeks ago that this show would have never come about had there been no controversy. Otherwise, it had been a straightforward Leander, Mahesh coming together winning a few Grand Slams everyone is so happy. If it's just a happy story nobody wants to tell it, everyone wants us to tell our story due to controversies surrounding it. Hopefully, all your questions will be answered when you see the show," Bhupathi told WION.

'Breakpoint' is a web series that perfectly captures the era of domination where Paes and Bhupathi were on top of the world before their split sent shockwaves in the Indian sports fraternity. The pair, who won a staggering 30 Grand Slams between them, displayed incredible dominance as a pair in doubles tennis.

"Breakpoint is a true story of two young Indian boys on how we embarked on a dream in the late 80s. On how we had a dream that we will win the Wimbledon and be no.1 in the world and actually what we had to do to achieve those dreams," said Paes giving an insight on what fans should expect from the docu-drama.

Paes also spoke about what went wrong between him and Bhupati which led to their public fallout and split before they reunited again to continue winning for India at the highest level. Paes reckoned it was not the most perfect of partnerships but the duo went on to achieve what they had dreamed of as young boys when starting out in their respective careers.

"The relationship saw the highest of highs and the lowest of lows. we pioneered through an ecosystem of sport that had no infrastructure or no textbook to show us how to win Wimbledon. We only had each other. And we lent on each other through the highs and fought through the lows but in lapse, we achieved our dreams and we are here today to inspire children across 190 countries to show them how winning is done. And also to tell them that champions are allowed to be vulnerable and make their mistakes too," said Paes, who holds the record for most doubles victories in Davis Cup.

Though Paes and Bhupathi achieved more than most in Indian tennis, there remains a question - Could they have won more had he and Paes stayed friends throughout their glorious careers? Bhupathi, a former World no.1 said he didn't need to prove to the world that the pair could have won so much more but he remains super proud of the magnificent achievements they managed to attain despite their controversial relationship.

"I don't have to do this series to tell you we would have won more. I watched it whole (Breakpoint) and it gave me goosebumps so many times to see the kind of footage that I have been able to see. Super proud of what we were able to achieve, could we have achieved more - yeah, but in the context of did anybody achieve what we did before we came along, it did right so we take the positive out of it," said Bhupathi.

Bhupathi also spoke about how the duo could have possibly settled their differences during their split by talking to each other and ensuring better communication. He also brought up an example from the documentary where Paes' travelling partner at the time of their split in 2002 felt that Bhupathai had already decided to partner with Belgian tennis player  Max Mirnyi. However, Bhupathi clarified he didn't play with Mirnyi and instead partnered with American ace Jan-Michael Gambill.

"If we had made an effort to communicate better and keep a lot of people on the periphery instead of letting us manage day to day, things would have been a lot better," said Bhupathi.

"Just to give you an example, I watched the show in entirety yesterday - When we split in 2002, I went to Leander's room we ended up not playing together and I had to search for a partner. Sanjay, who was Leander's travelling partner at the time, verbally states that I had already fixed up a partner to play next week with Max Mirnyi. It was pure fabrication and I know Leander long enough to know he was not a guy to dig into that kind of stuff. And I did not play with Max Mirnyi that week, I played with Jan-Michael Gambill. So there were too many people just putting stuff like that which kind of snowballed into getting to where we were," he added.