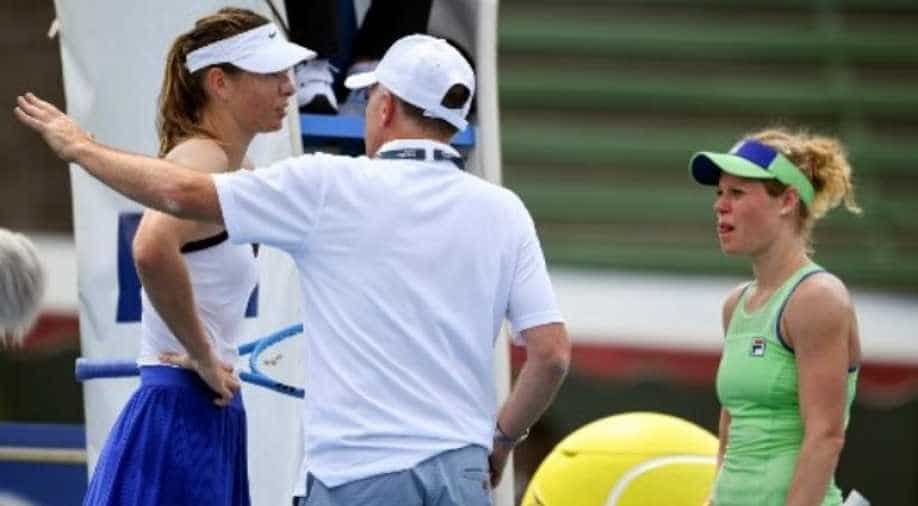 Players Maria Sharapova of Russia (L) and Laura Siegemund of Germany (R) speak to a tournament official as their match is abandoned due to the smoke from Australia's bushfires, in Melbourne Photograph:( AFP )

Australia Open qualifying matches were delayed due to Hazardous Air conditions. But Craig Tiley (director of the Tournament) has defended the decision to proceed with the qualifiers.

The year's first Grand Slam started with a sheet of haze and smoke that covered Melbourne due to the Australian bushfires.

Australia Open qualifying matches were delayed due to Hazardous Air conditions. But Craig Tiley (director of the Tournament) has defended the decision to proceed with the qualifiers.

#AusOpen practice was temporarily suspended this morning due to poor air quality.

Qualifying matches will begin at 11am.

Conditions onsite are improving and we are monitoring them constantly.

A player collapsed in a coughing fit and retired from the Australian Open qualifying on Tuesday as organizers faced criticism over the matches going ahead despite Melbourne's air quality to "hazardous" levels due to the bushfires.

Slovenia's Dalila Jakupovic was leading against Swiss player Stefanie Vogele (6-4 5-6) at Melbourne Park Arena, Melbourne when she collapsed on her knees on the blue hardcourt. She was seen fighting for breath.

Saying everybody to stay inside and keep the schedule !? Very Well done!!! #hopesheisfine... pic.twitter.com/hzDFB8DYgZ

Authorities expect the smoke to stay until Wednesday when showers in the afternoon are forecast.

Novak Djokovic expressed concern earlier this month that bushfire smoke might cause health problems for players. Maria Sharapova and Laura Siegemund's matchup was abandoned due to smoke. Maria Sharapova called off the match as she was unable to bear the heat and the smoke.

Tournament organizers last week said that play will be confined to indoor stadiums if the air quality deteriorates.

Why do we need to wait for something bad to happen to do an action 🤷🏼‍♀️🥵 #Melbourne pic.twitter.com/bYpXyQAfKe

A professional tennis Mandy Minella who hails from Luxembourg is competing for the qualifiers took to Twitter to express her concerns to the authorities.

Shocked to see that qualifying matches have started @AustralianOpen
What about the health of all the people that have to work out there, especially the ballkids? #wherearethelimits? pic.twitter.com/2oldEptT2g

The Australian Open is scheduled to be played between January 20 to February 2.