The protector is the perpetrator 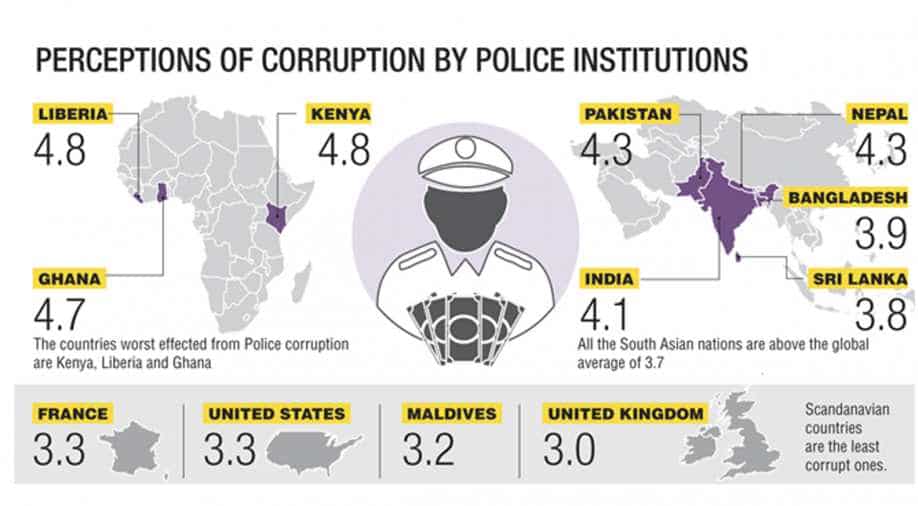 Survey shows police forces are considered to be one of the most corrupt in the world Photograph:( DNA )

Sixteen women of Bijapur district of Chattisgarh were raped and violated by the state’s police personnel in October 2015.

The National Human Rights Commission (NHRC) found that the rights of the victims were ‘grossly violated’ by the police for which Chattisgarh government is ‘vicariously liable’.

Last week, video images were captured of Mumbai cops accepting bribes from relatives of inmates to let the relatives meet inmates showing the gory side of corruption in police and jail systems of India.

From being the protector to becoming the perpetrator is a downright assault on our democracy.

Over the years, several cases of corruption and wrongdoings by police both in the jail and outside the jail have surfaced and made us question our law keepers.

According to a study by Transparency International, 62 per cent of Indians have admitted to paying bribe during 2012 - 2013.

Another study by Janaagraha observes that the police in 6 metro cities accepted an estimated Rs 14.6 million in bribes for 7,170 reported cases of bribery in 2013.

The organisation further estimated that a person in India pays around Rs 4 lakhs in bribes in his/her lifetime.

Nearly half of the police personnel have reported that they are called eight to ten times a month during their off days.

Corruption by police and in jails is a challenge globally.

Interestingly, in foreign countries corruption in jails has been popularised by the spate of television dramas set in correctional facilities.

According to a study in the United States, prison guards at Rikers Island in New York could substantially supplement their income by $400 - $900 (Rs 30,000 to Rs 60,000) a day by smuggling drugs, weapons and other contraband into prisons.

Apart from financial bribes, it was found that sexual favours are also traded for better benefits. The problem is not limited to just officials accepting bribes in prison complexes in the US.

There is a structural issue as most prisons in the US are run by profit making corporations. Thus, in order to maintain their profits, many people are wrongly imprisoned or kept in prison to

increase the bed count by these private organisations.

Transparency International measured perceptions of the extent of corruption in different Institutions of 107 countries; the survey ranked police as the second most corrupt institution globally.

This clearly indicates that the image of the law protectors around the world is severely scarred by suspicion.

The Indian prime minister recently talked of promoting ‘SMART’ policing; the letters standing for strict and sensitive, modern and mobile, alert and accountable, reliable and responsive, as well as trained and techno-savvy. The challenge is that when one decides to change the course, it needs an all-encompassing action.

It requires hard clampdown on corruption but also needs the reform to treat policemen with the respect that they deserve.

Police organisation should not be treated like a boys' club that operates on internal abuse and coercion.

The police force is not like the military which has a strict code of conduct as well as checks and balances. Unlike the military, the police are constantly exposed to civilians and, thus, the force needs to function in collaboration with the city and its people.

One needs to understand that policemen are not like hired security guards. It is an institution that can help sustain democracy in its truest form.