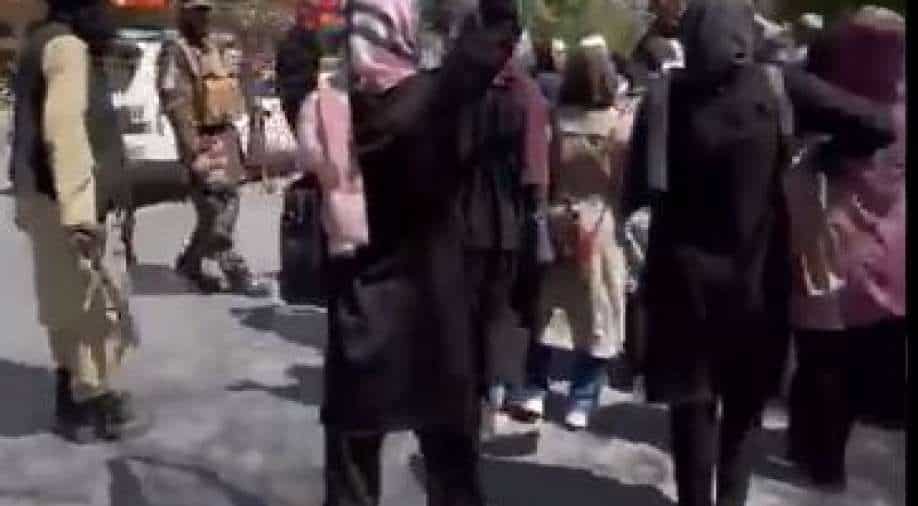 The Taliban government urged Afghan citizens not to attempt to hold any demonstrations under "any name whatsoever". In an order it asked people to take prior approval from the Justice Department before holding demonstrations.

As protests against its takeover of the country continue, the Taliban asked telecom companies to shut internet services until 2 pm in some areas of Afghanistan.

Reports have emerged that Taliban fighters whipped protesting women in some areas.

According to reports, the internet shutdown has been set in motion in Afghanistan's Khuwaja Bugra, Taimani, Khair Khana, Dasht e Barchi and Qasaba areas, to censor the coverage of protests.

Another epic #KabulProtest with #Afghanwomen refusing to stop marching when facing off with #Talibs. Full video of the protest which ended with extreme gunfire here - https://t.co/9s6ksw6AUL pic.twitter.com/njoyi20UND

There have been largescale protests across the nation against the Taliban even though the new government said on Wednesday that people need to take approval from authorities before conducting protests.

In a statement, the Afghanistan government had said the protests had caused security breaches and harmed citizens while creating chaos.

The government urged citizens not to attempt to hold any demonstrations under "any name whatsoever". "Demonstrations must be legal, as it is necessary first of all to obtain permission from the Ministry of Justice," it added.

"The concerned authorities must also be informed at least 24 hours in advance of the purpose of the demonstrations, the slogans and banners that will be used in them, their location, and the time of their start and end," the statement said.

There were also reports of Taliban beating women protests with whips as they changed "freedom".

On Wednesday, protesters had gathered in Kabul as Taliban security forces soon arrived. According to Afghan media, there were protests in the northeastern city of Faizabad. Women have protested in large numbers in Afghanistan. Protests also took place in Herat even as the Taliban said protesters "will face severe legal action".

Tolo News had reported that hundreds of women had protested in Kabul, Parwan and Badakhshan on Wednesday after an acting minister for women affairs was not announced among other ministers in the Taliban cabinet.