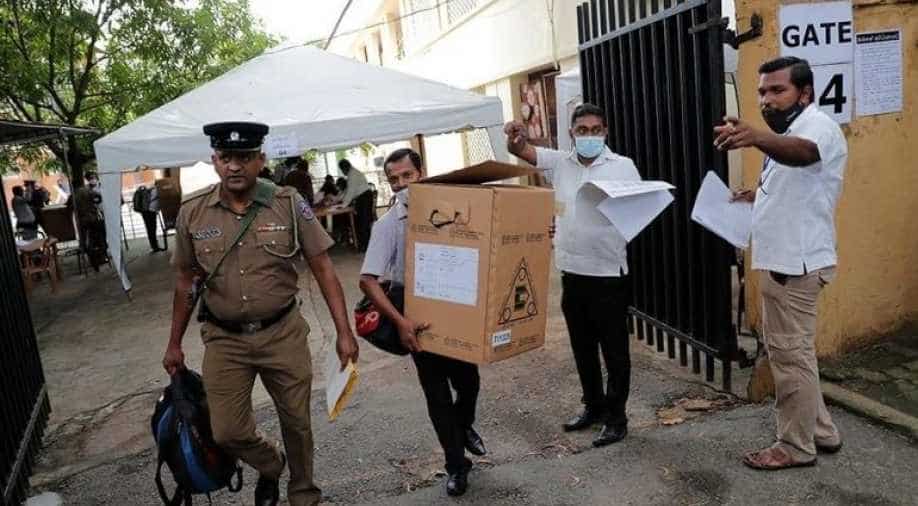 A total of 7,452 candidates from 54 political parties and independent groups are contesting the election in 22 districts.

Sri Lankans have started voting in the twice-postponed parliamentary election on Wednesday with the powerful Rajapaksa family-run party expected to gain control of the assembly that could allow them to amend the Constitution to restore presidential powers.

Over 16 million people are eligible to vote to elect 196 out of a total of 225 lawmakers for the next five years. Twenty-nine others will be named from a national list according to the number of votes received by each party.

The counting will take place only on the following morning, a departure from the practice of counting the ballots from 8 pm on the election night.

President Gotabaya Rajapaksa hopes for a two-thirds majority for the Sri Lanka People's Party (SLPP) in the general election so that he can amend the Constitution to restore presidential powers curbed by a 2015 constitutional change.

His older brother and former President Mahinda Rajapaksa, who is seeking reelection as prime minister, is assured of a sweeping victory as the main Opposition is badly divided.

Basil Rajapaksa, the powerful national organiser of the SLPP, said that the entire Opposition would poll less than half of the SLPP's total votes.

"We will record a sweeping victory at the election and our opponent will not be able to muster even half our votes, Basil said.
According to many political watchers, the Rajapaksas' victory is only a matter of how many seats and not if they would win it.

This may seem an almost unthinkable return to the pinnacle of power for the family who had been electorally disgraced by the unexpected loss of Mahinda Rajapaksa in 2015.

In 2015, the Rajapaksas were battling arrests and corruption cases in court. There were scores of cases filed against them for alleged misappropriation and the cases are still pending with no conclusions to them.

Gotabaya's victory in the November presidential election was the second reversal of their fortunes for the better. The first was in 2018 when their fledgling SLPP recorded a resounding win in the local council election, which to all intents and purposes signalled their return to power.

President Gotabaya has campaigned for unbridled power to him through the repealing of the nineteenth amendment (19A) to the Constitution.

In 2015, President Maithripala Sirisena and Prime Minister Ranil Wickremesinghe's government moved the 19A which brought in a stream of reforms that strengthened the post of the prime minister.

The reforms also ensured the independence of judiciary and elections. However, the Rajapaksas' saw the amendment as a move to curb them politically some of its provisions such as those which barred dual citizens from holding political office.

Gotabaya had to renounce his US citizenship to contest the November election.

The Rajapaksa campaign in this election was for parliamentary control to give Sri Lanka a strong government. They cashed in on failings of the last government and the power struggle between Sirisena and Wickremesinghe, who headed rival parties while in government.

Sirisena, the man who ended the family grip of power in 2015, has mended fences with the family and he is contesting a seat from his north central district home base from SLPP while for Wickremesinghe it had been downhill since he became the prime minister in a fragile coalition.

Wickremesinghe had to give in to his deputy Sajith Premadasa to run for presidency in November. After Premadasa's loss, the chorus for Wickremesinghe's exit from being the leader of the country's oldest political party became louder. He held on as he had done over the last 26 years, only to face a challenge from Premadasa's newly formed SJB who are expected to win more seats than the UNP.

The Marxist JVP, a key ally of the then opposition against Rajapaksa in 2015, is going on their own. Their campaign is based on blaming both the two major political parties which ruled the country since 1948. They seek to increase their numbers by posing as the alternative to the parties who had bungled for 70 years.

In the north and east, the Tamil National Alliance (TNA), who were also part of the 2015 pro-democracy alliance against Mahinda Rajapaksa, seeks the Tamil support to pursue their struggle for political autonomy to the Tamils. They are facing stiff resistance by the hardline Tamil bandwagon led by the former northern chief minister CV Wigneswaran.

A total of 7,452 candidates from 54 political parties and independent groups are contesting the election in 22 districts. The polls are being held under strict COVID-19 health guidelines.

Mahinda Deshapriya, the Chair of the Elections Commission, has said that there is no threat of the coronavirus at polling centres.
"Voters can cast their vote without any fear during the poll," he said.