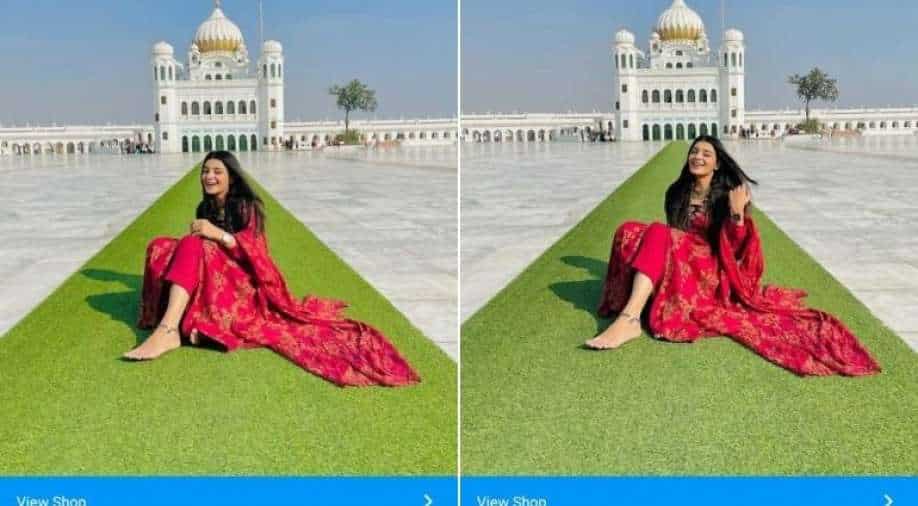 Importantly, the woman in the photos was not wearing a head scarf, as is customary for individuals of all faiths within any Sikh gurdwara. Photograph:( Instagram )

A Pakistani fashion brand, has been chastised for what many people have described as a "objectionable and disrespectful" photoshoot that appeared to have taken place in the Kartarpur Gurdwara.

After photographs emerged of a model posing for a clothing company without a head cover inside the Sri Kartarpur Sahib Gurdwara, a Pakistani clothing firm is receiving backlash from the Sikh community and others.

Sikh leaders have condemned the behaviour as offensive and insensitive.

Manjinder Singh Sirsa, leader of the Shiromani Akali Dal (SAD) and head of the Delhi Sikh Gurdwara Parbandhak Committee, has urged Pakistan's government and Prime Minister Imran Khan to take action against it.

Such behaviour & act at pious place of Sri Guru Nanak Dev Ji is totally unacceptable!
Can she dare to do the same at her religious place in Pakistan?@ImranKhanPTI @GovtofPakistan shd tk immed action to stop this trend of treating Sri Kartarpur Sahib as picnic spot by Pak people pic.twitter.com/AwyIkmqgbC

Fawad Chaudhry, the Pakistani minister, has also demanded an apology from a clothing brand's designer and model for staging a photo session at the Gurdwara Sri Darbar Sahib in Kartarpur.

The Designer and the model must apologise to Sikh Community #KartarPurSahib is a religious symbol and not a Film set….. https://t.co/JTkOyveXvn

Meanwhile, the clothing firm has apologised on its Instagram account, stating that "Mannat Clothing did not participate in any of the photo shoots shown on our accounts." A third-party (blogger) sent us these photos, in which they were wearing our clothing.

Meanwhile Punjab Police in Pakistan has said that 'strict legal action' would be taken against those responsible. They said that the clothing brand and the model were being investigated.

"Punjab Police are investigating all aspects related to this incident and strict legal action will be taken against responsible. Management of concerned brand & model are being investigated. Worship places of all religions are equally respectable," the police department tweeted.

Punjab Police are investigating all aspects related to this incident and strict legal action will be taken against responsible. Management of concerned brand & model are being investigated. Worship places of all religions are equally respectable.@MashwaniAzhar https://t.co/HLqwRKmOKY