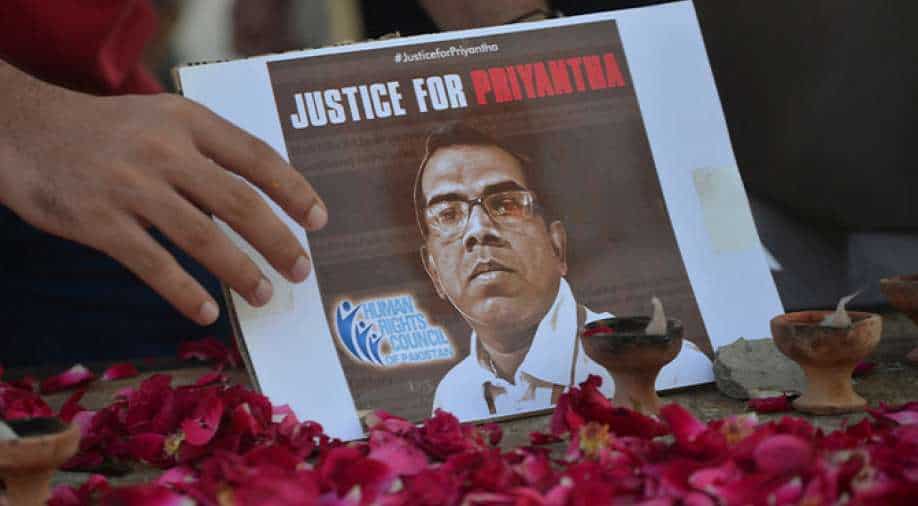 49-year-old Priyantha Kumara was lynched by a frenzied mob in Sialkot on December 3 Photograph:( AFP )

Meanwhile, seven more prime suspects in the lynching of 49-year-old Kumara have been arrested by Pakistan’s Punjab Police, taking the total number of arrests to 131

The remains of a Sri Lankan man, who was brutally tortured to death and set ablaze in Pakistan, were sent to Colombo from Lahore airport on Monday.

The Sri Lankan embassy officials had gone to the hospital to escort Priyantha Kumara's body to the airport and laid flowers over it.

Priyantha's last rites will be performed upon the arrival of his body in Sri Lanka.

Meanwhile, 26 suspects arrested in connection with the lynching of the Sri Lankan factory manager have been remanded into police custody, according to local media.

The police presented the suspects before an anti-terrorism court earlier in the day and requested their remand for interrogation.

The court granted police granted 15-day remand for interrogation and ordered the investigation officer to present them on December 12.

Meanwhile, seven more prime suspects in the lynching of 49-year-old Kumara have been arrested by Pakistan’s Punjab Police, taking the total number of arrests to 131.

Over the past three days, the police have arrested scores. The suspects included the individual allegedly involved in planning the attack as well as others who waged violence and incited others.

On December 3, a frenzied mob, some supporters of Islamist group Tehreek-e-Labbaik Pakistan (TLP) lynched Kumara to death and then burnt his body in public over blasphemy accusations in Sialkot region.

According to Geo News, the cause of death in Diyawadana's post-mortem report was skull and jaw fractures.

All of his essential organs were impacted, including his liver, stomach, and one of his kidneys, while torture scars were apparent all over his body and his spinal cord was broken three times, according to the report.

According to the post-mortem examination, 99 per cent of the Sri Lankan national's body was charred, and all of his bones were fractured except for one foot.