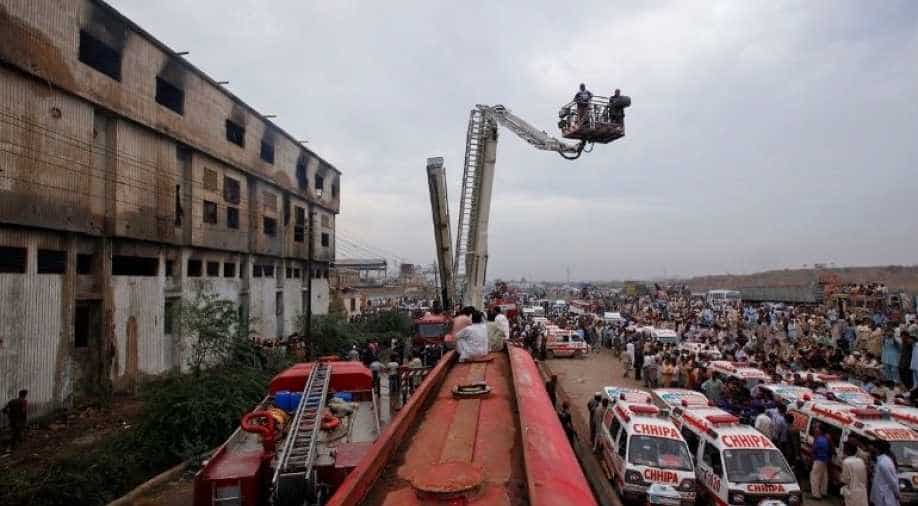 Ambulances and fire brigade vehicles outside a building, after a fire at a garment factory in Karachi September 12, 2012. Photograph:( Reuters )

Pakistan's deadliest industrial fire, which killed more than 260 garment factory workers in 2012, was a case of arson and not an accident

Pakistan's deadliest industrial fire, which killed more than 260 garment factory workers in 2012, was a case of arson and not an accident, a court ruled on Tuesday as it sentenced two former political party activists to death for starting it.

The Anti-Terrorism Court found that the men set the factory ablaze because the owners did not give in to their extortion demands and pay them money.

The fire at Ali Enterprise, a multi-story unit for readymade garment manufacturing in the southern city of Karachi, sent shockwaves through the country as survivors told of people trapped and killed behind locked factory doors.

Of the eight other people accused in the case, four were found complicit while the other four were acquitted, including the then provincial minister for industries, Rauf Siddiqui, defence counsel Abid Zaman told reporters outside the court.

Siddiqui belongs to the Muttahida Qaumi Movement-Pakistan (MQM-P), a party linked to years of at times violent political rivalry in Karachi and now a partner in Prime Minister Imran Khan's coalition government.

The two men given the death sentence, Rehman Bhola and Zubair Chariya, were both MQM activists.

As many as 400 witnesses gave statements in 171 hearings that spanned eight years.

While the MQM is part of the ruling coalition, the party split into several factions in 2017.

The current MQM leadership denies any involvement with the fire and says such activities were directed from abroad, where several important leaders live, including the founder of the party, Altaf Hussain, who lives in exile and is now a British citizen.

The party says it has cut all ties with Hussain.