From one crisis to another, tracing Nepal's journey in last 3 years 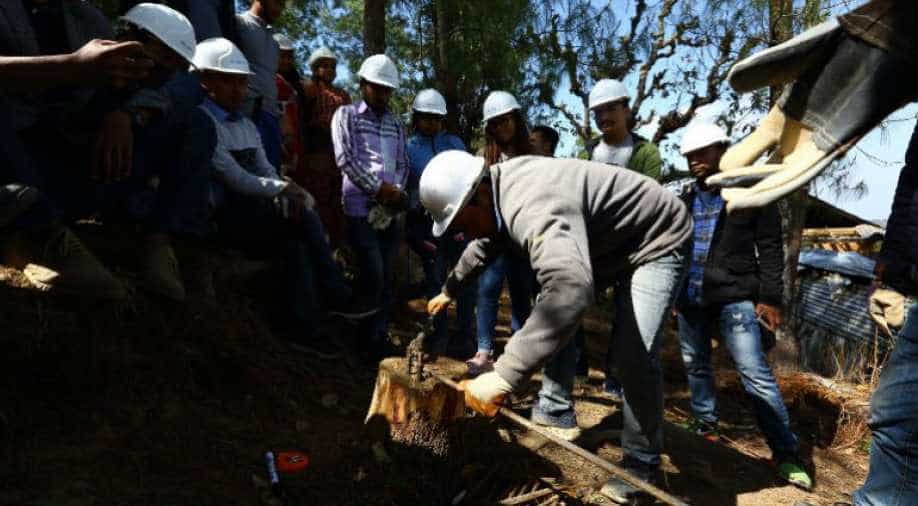 Engineers train in retrofitting techniques outside an earthquake-damaged house in the village of Dungkharka, some 45 km east of Kathmandu. Photograph:( AFP )

Prime Minister Narendra Modi has reached Nepal on a two-day state visit during which he will hold talks with the country's top leadership to build mutual trust.

Nepal has been a nation in crisis since last 10 years it has suffered political crisis, earthquake and impact of demonetisation. But the last three years have been particularly difficult.

In 2015, many of the country's historic sites were levelled after an earthquake struck Nepal. It was the worst earthquake in Nepal since 1934 in which 9000 people died. Hundreds of thousands of Nepalese were made homeless with entire villages flattened. Centuries-old buildings were destroyed including many UNESCO World Heritage sites in the Kathmandu valley, like the Durbar Square in Kathmandu, the Patan Durbar Square, the Bhaktapur Durbar Square, the Changu Narayan Temple, the Boudhanath Stupa and the Swayambhunath Stupa.

Nepal was on path to recovery but a year later, India announced its decision to scrap the existing currency under demonetisation and the Himalayan kingdom's redevelopment plans were in doldrums.

India is Nepal's largest trade partner and the supplier of the bulk of consumer goods. Indian currency is widely used by businesses and individuals who keep their savings at homes in Indian bank notes. In Durbar Square, where life was limping back to normal, suddenly everything came to a standstill.

Central Nepal Rastra Bank (NRB) officials said the Reserve Bank of India (RBI) verbally agreed to allow every Nepali national to exchange up to Rs 4,500 worth of scrapped Indian bank notes in a meeting in March last year.

"But nothing has been communicated to us formally so far," NRB Deputy Governor Chinta Mani Shivakoti told Reuters.