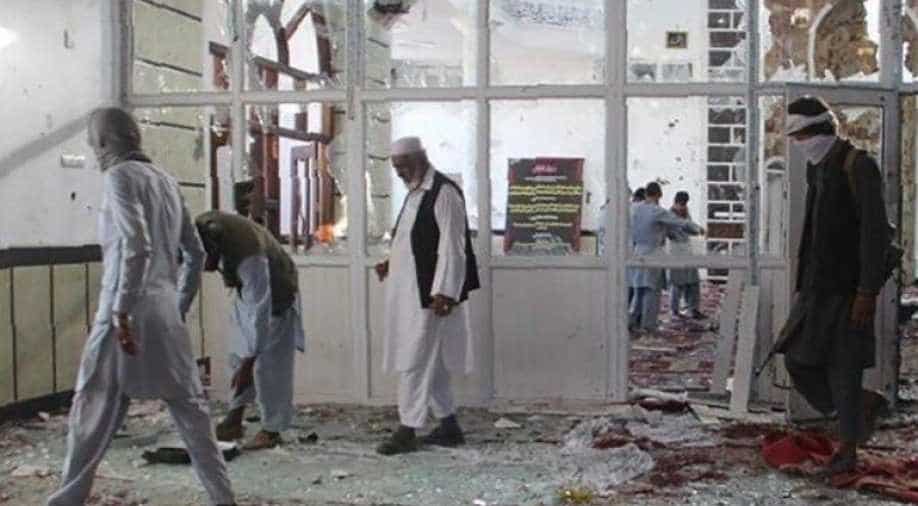 Officials analyzing the damage in the mosque after the blast in Afghanistan Photograph:( AFP )

The Ministry of Interior confirmed the attack in Parwan's provincial capital Charekar, blaming it on the insurgent Taliban.

"Unknown gunmen fired on people praying inside a mosque during iftar time," said Wahida Shahkar, spokeswoman for the governor of Parwan province, referring to the meal eaten to break daytime fasting during the Islamic holy month.

The Ministry of Interior confirmed the attack in Parwan's provincial capital Charekar, blaming it on the insurgent Taliban. The Taliban denied responsibility and said Afghan security forces were to blame.

The United Nations has warned of an alarming uptick in violence against civilians in Afghanistan. A shocking attack on a Kabul maternity ward last week killed 24 people, including newborn babies.

Violence increased around the country even after a February 29 US-Taliban pact on the withdrawal of US.-led foreign forces in exchange for Taliban security guarantees.

Afghan security forces on Tuesday clashed with Taliban fighters around the city of Kunduz, a strategically important centre that has been one of the Taliban`s main targets and which the group has briefly captured twice in recent years.

Security forces largely repelled the Taliban offensive with the help of air support and Assadullah Khalid, acting minister of defence, said during a visit to the city that more than 50 insurgents and eight security force members had been killed.

The Taliban have rejected repeated calls for a ceasefire by the Afghan government. They deny any involvement in the maternity ward attack and the United States believes the Islamic State was responsible.

The United States has sent special envoy Zalmay Khalilzad to Doha and Kabul to press the Afghan government and the Taliban to start stalled peace talks. Khalilzad has said he will push for a reduction in violence during the trip.