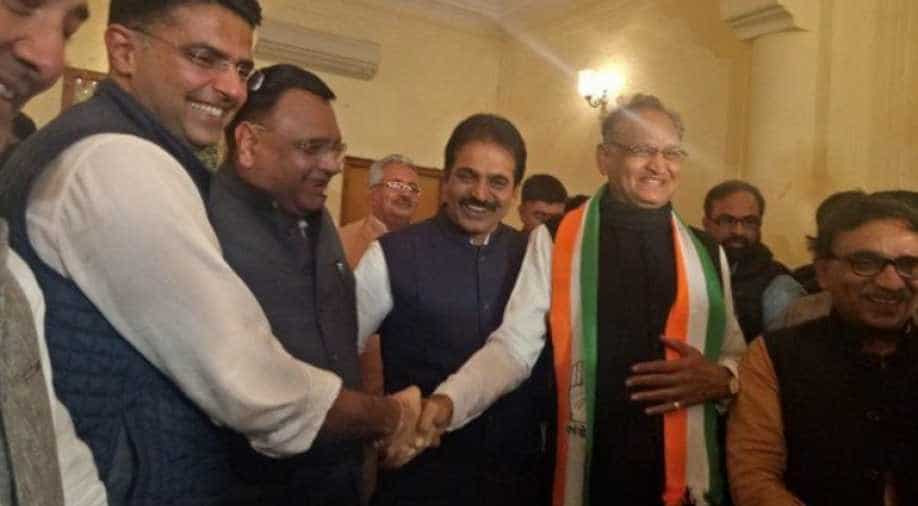 Both realise that their long-term prospects depend on the Congress’s performance in the state in the Lok Sabha polls.

It took three days for the Congress, after its electoral victory, to name a chief minister for Rajasthan. There was nothing exceptional in the delay; the Bharatiya Janata Party had consumed nearly a week before it could finalise chief ministers for Maharashtra and Haryana. It can be argued that unlike in the case of the two latter states, the chief ministerial faces for Rajasthan were evident to the party even as it went to polls.

True, but instead of easing the situation, this really made the task of selection more difficult.

Neither Ashok Gehlot nor Sachin Pilot was a pushover. The first had experience; he had been chief minister on two occasions. The second, as the state Congress chief, had revived the party after its defeat in the 2013 Assembly elections, and later in the 2014 Lok Sabha polls where the party drew a blank in the 26 seats.

As a veteran, Gehlot had the support of a number of senior leaders, both at the state and at the grassroots levels. Pilot has age on his side and he connects effortlessly with the aspirations of the youth; besides he is a fresh and dynamic face.

The last factor ought to have in normal situations worked in Pilot’s favour. After all, as Congress president, Rahul Gandhi has often spoken of giving the youth a push-up in the party and appointed several young faces in leadership spots across the country. But the Rajasthan case was not normal. Not only was the Gehlot camp formidable but there was also the looming Lok Sabha elections to be considered. The choice between the two leaders, therefore, boiled down to the prospect of 2019.

Matters became further complicated for the Congress leadership after Pilot’s camp decided on aggression on the streets. The young leader’s followers blocked roads and even indulged in some arson to demand that he be made the chief minister. This was posturing of an extreme kind. On the other hand, Gehlot’s street backers remained relatively subdued. Perhaps their leader had sent across a warning that such outpouring of support would be counter-productive to his cause. Or perhaps he was confident of emerging the winner in the end, because he knew that Sonia Gandhi backed him and would have the final say.

Most media accounts inform us that Pilot was Rahul Gandhi’s choice, but that UPA chairperson and former party chief Sonia Gandhi rooted for Gehlot. There was no way her opinion could be ignored. Her intervention is understandable. She is the Congress’s tallest leader. Besides, as UPA chairperson, she had a role to play, given that the Congress had to take the support of others to form a stable regime. But there was also the Priyanka Vadra factor. She too participated in the extensive deliberations and is said to have backed Pilot’s candidature. Gehlot’s success, thus raises the question: With Rahul Gandhi failing to get his candidate chosen, did he not demonstrate the fact that he is not the final voice in the party, even though he is the party chief?

Nobody knows for certain which of the two leaders enjoyed the majority support of the newly-elected MLAs. Some reports have it that Pilot had the upper hand. If that was indeed the case, then Gehlot was thrust on the MLAs as their leader. It will also make his task as chief minister a little more difficult. Ironically, the compromise formula worked out which led to his being chosen the Chief Minister, itself could hamper his functioning in the months to come. With Pilot being named the deputy chief minister, Gehlot will be looking over his shoulder all the time.

While the months ahead will demonstrate the workability of the arrangement, the fact remains that the Rajasthan government will have two power centres — one led by the chief minister and the other by his deputy, and friction cannot be ruled out. Perhaps what will make the two leaders work in tandem, at least for now, is the challenge of 2019. Both realise that their long-term prospects depend on the Congress’s performance in the state in the Lok Sabha polls. There will be another time and day to pursue their rivalry. But Pilot would know that his vote bank, especially the Gujjar community to which he belongs, will not be happy for too long with the present arrangement. His supporters feel let down, more so because they see the deputy chief ministership as nothing more than a sop, more so because Gehlot is unlikely to give his younger colleague the leeway that the latter must be hoping for in party and governance issues.