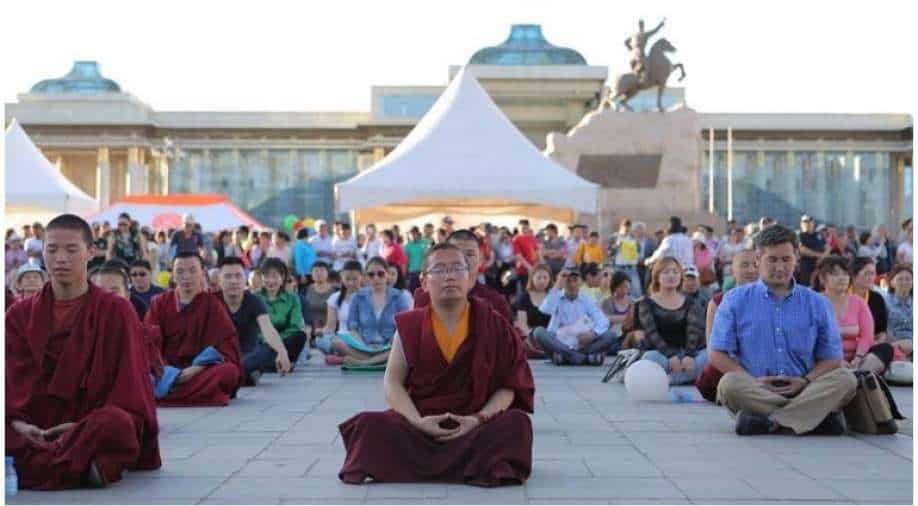 The ancient Indian culture and arts reached Mongolia through its dharma

Vesak (Pali: Vesākha, Sanskrit: Vaiśākha), known as Buddha Jayanti or Buddha Purnima and Buddha Day is observed by Buddhist communities in and beyond India as the day of the birth, enlightenment and death (Parinirvāna) of Gautama Buddha.

We in Mongolia also plan to celebrate the Buddha Day on 26th May declared as a public holiday.

Historically, Buddhism was introduced to Mongolia not once but three times. The first transmission happened over two thousand years ago when in ancient times Indian acharyas went to Mongolia for disseminating Dharma. A famous Mongol scholar, Gabju Zava Damdin (1867-1937) who was one of the founding members of the Institute of Sutras and Letters of Mongolia, has recorded in a book on history- Buddhism was introduced into Mongolia through the Silk road at the time of Hunnu (Xiangnu) empire, known as the first state established by the Mongols, nearly 2200 years back”.

Other sources claim that Buddhist monasteries and temples were built on the Mongolian land at the time of Xianbei state which had emerged afterwards.

In 7th century Xuanzang, a Chinese traveler, who was a Buddhist monk and a scholar recorded that while traversing the Gobi desert on the way to reach the Silk Road, he saw Buddhist temples in the territory of Mongols, where monks were doing puja and studying, as well as chanting in Indian language.

Also, there is a record that states that in the 6th and 7th centuries an Indian Pandita Narendra-yashas and a teacher at a school in Magadha, Baragawara Midara, came to the land of the Mongols.

Historical sources corroborate that Mongolia was indeed the earliest to receive the Bauddha dharma among the three dharmic lands after India.

There are archeological evidences to prove the second spread of Buddhism in Mongolia. For instance, a Buddha’s statue found in the tomb of a Uyghur nobleman is directly related to the time of Uyghur empire (9th-10th century) in Tsagaan– Ovoo soum of Dornod province.

The ancient Indian culture and arts reached Mongolia through its dharma. Based on these and other records, we can say that our ancestors adopted the Bauddha dharma from India through Sogdian and Uyghur panditas in ancient past.

Kavyadarsha by Dandini (a Mirror of Poetry) is an ancient systematic methodology of poetry in Sanskrit, which was composed in the 7th century in India. Kavyadarsha plays an important role in oriental literature. This text on Indian theories of poetry was translated into Mongolian language like Pali and Tibetan. Learned lama Gelegjaltsan had translated this text on theories from Tibetan into Mongolian in the17th century and other lamas wrote commentaries in Sanskrit language. Even nowadays, the young generation of scholars like D. Shirendev, who studied at the Central Institute of Higher Tibetan Studies in Varanasi, translated 13 volumes of Pali Tripitaka into Mongolian. 8 volumes of the 13 are already published. “The Tsogt Khurden” an editorial group is also doing translation and comparative studies of these ancient sutras from Pali and Sanskrit languages.

Later, since 13th century Mongolian emperors invited the spiritual masters and assigned them the tile of “Imperial guru” for enlightening the commoners with Bauddha Dharma. Chinggis Khan exempted Buddhist monasteries from taxes. His successor, Ugedei khan established a Buddhist monastery in the capital of then Mongolian empire- Khar Korin. Guyug Khan, Godun Khan, Mongke Khan and Kublai Khan and their descendants disseminated the Bauddha Dharma during their respective times. During the time of Khaisan khuleg Khan and Buyan Khan Buddhist sutras such as “Pancha Ragsha Sutra”, “Saddharmapundarika Sutra” and “Arya Manju Shiri Nama Samgiri” and “Bodhicaryavartara” were translated into the Mongolian language and Kanjur was casted in gold.

Thus, from Chinggis to Togoontumur all the great khans were relying on Dharma and Damma Gurus.

The monasteries, statues and stupas built during the Yuan dynasty are countless. The manuscripts “Shebya Rabsel” composed by Phagva Lama at the request of Chingim, a son of Kublai Khan was block-printed. This sutra, written in the Square script the then formal script of the Yuan dynasty, obviously attracts interests of scholars because Mongolians used all the Buddhist terms and notions that were used in the old Mongol script when they translated Buddhist sutras.

Prof. B Rinchen made a catalogue of the texts translated into Mongolian which could be partly published during his life-time. Now Dr. Shashibala, Bharatiya Vidya Bhavan is editing the remaining part and contemplates to publish them in four volumes.

The 13th century’s famous annals “The Sacred History of Mongols” (Chapter 261 to 264) referred to India as Hindu or Hindustan and the river of Indus as Sindhi or a “Shine gol or New river”. By the way this manuscript was first translated into English language in 1959 at Aligarh Muslim University by noted historian Mohammad Habib.

At the time of Ligden Khan Mongolian scholars completed translating the entire Kanjur and Tanjur consisting of over 5000 sutras. By the end of 15th century Mongolian noblemen extensively contributed to the spread of Bauddha Dharma. Amongst them, Altan Khan of Tumed invited His Holiness Sonam Gyatso to Mongolia and himself became his spiritual disciple and bestowed the famous title of “Dalai Lama” to His Holiness (Lama with knowledge as vast as ocean).

In the 16th century, there were three great Buddhist figures spreading Dharma. At the grace of Neij toin (Avid) from Inner Mongolia, Lofty Venerable Zanabazar (Gyani Vajaru) from Khalkha and Jaya Pandit Namkhaijamtso from Oirad, the Gelugpa tradition flourished in its full zenith. At this time, all Mahayana manuscripts were entirely translated into the Mongolian language. Many if not all of them, are preserved in the Gandantegchilin monastery and Public Library of Mongolia.

Honorable Narendra Modi, Prime Minister of India during his official visit to Mongolia in 2015 graciously presented saplings of Banyan tree and pledged to help in building statue of Lord Buddha and his two disciples as well as digitalizing these ancient and rare Buddhist manuscripts. His offer was deeply appreciated as a vivid indication of our bonds of Dharma and common civilizational affinities.

Two years back, Government of India built up and gifted statues of Lord Budha and his two main disciples’ beautifully crafted by well-known sculptors Ram and Anil Sutars to the Gandantegchilin monastery in Ulaanbaatar. And 108 volumes Mongol Kanjur a compilation of Buddha’s teachings have also being republished by the National Mission for Manuscripts, Indira Gandhi National Centre for the Arts, Ministry of Culture, GOI along with International Academy of Indian Culture in order to present to Mongolia on the upcoming Buddha Day.

Teachings of Buddha and Buddhism have become inseparable part of Mongolian way of living. Madhyamika, known as the Middle Path or Noble Eightfold Path, consisting of perfect view, perfect thought, perfect speech, perfect action, perfect mode of living, perfect endeavor, perfect mindfulness and perfect consciousness helped to form our thoughts and turned into a philosophy that has huge impact on our state policy.  Henceforth, Mongolians attach highest value to gyan (knowledge), dharma (realization) and karma (action). Though, sitting on the northern and southern fringes of the Buddhist Asia Mongolia and India have been intertwined with such spiritual legacies which has grown into a solid basis of our state-to-state relations. Recently, we jointly marked the 65th anniversary of the establishment of the diplomatic relations.

These dharmic and cultural ties, in my belief will continue to contribute to the growth of our relations in the coming years too. By the way Mongolians adhere to oriental calendar and account by sixty-years instead of a century. For instance the date of 26th May, 2021 is defined as day of Dog of month of Snake of White Ox year of the 17th Sixtieth.

Since Buddhism adopted in my country came from India and many of our learned scholars studied at the ancient centers of Buddhist studies such as Nalanda. Coming back to Mongolia after the attainment of high religious order they significantly contributed to the promotion of humane values in their native land. Mongolian Buddhist scholars wrote a large number of sacred texts on the tradition of Dharma. With enormous suffering and great sacrifices Mongolians have preserved their national culture and Buddhist heritage. I wish to note that majority of Mongolians practice Buddhism, not only as religion but as a philosophy of empowerment and contentment. Even nowadays a large number of novitiates are cloistering in monasteries in India.  Thus, Bharat regarded as a sacred land of Dharma and a source of wisdom and knowledge.These spiritual ties constitute another pillar of our close cultural and educational exchanges.

On this auspicious occasion, I pay heartfelt tributes to those Buddhist masters who cultivated Dharma and Damma and brought our two nations as closer as strategic partners.

Both of us, peace-loving nations, free from any military alliances are constructively collaborating within the framework of the Asian Buddhist for Peace Conference over 50 odd years and  International Buddhist Confederation in order to avoid conflicts and facilitate understanding and amity. Undoubtedly, the contemporary world needs more spiritual and moral empowerment for sustainable development. It is worth to be underlined here that the Teachings of the Gautam Buddha are more relevant today. They not only inspire the people for cultivation of wisdom but also for peaceful co-existence, mutual respect and togetherness.

When people get associated through faith and conviction, their bonds become more durable since spiritual mind that never aggravates but cultivates truthful consciousness and ensures the path of compassion and enlightenment.

Our collaborations are exponentially growing in multiple areas including information and communication technology, agriculture and mining industry. Collaboration between Mongolia and India have ample room for growth and will play  a substantive role in their economies.

Mongolia ranks as one of the richest countries in Asia as well as in the world in terms of variety and value of its mineral resources. More than 8 thousand deposits of 440 different minerals including cooking coal are discovered, of which around 600 deposits are being exploited.

Mongolia exports primarily commodities such as minerals and agricultural products. These account for about 80 percent of our exports. However, the Government pursues policies supporting investors who export not just raw material, such as ores and concentrates, but bring in deep processing and produce value-added products. There is immense potential still available to increase non-mineral exports, especially of agriculture-based Mongolian brand products. Today 80 million heads of animals have been counted which constitute untapped resources of ecologically clean hides, dairy, cashmere and wool.

To bolster sustainable growth, Mongolia has undertaken a comprehensive set of initiatives over the past years in such areas as taxation, visa regime and trade policy that provide for a stable investment and legal environment and clear guidelines for the role of Government in major projects.

Mongolia currently offers a range of tax concessions for export-oriented industries and priority sectors of economy. Foreign investment is encouraged in tourism. Indian tourist companies used to work in the area of studying market and legal environment are now showing interest to ramp up their presence and increase their operations in Mongolia. Given the promising initiative of the “Hunnu Air” a company of Mongolia to launch scheduled flights connecting Ulaanbaatar and New Delhi and brand new International Airport at Khoshigt valley, outskirt of Ulaanbaatar coming into operation. I am optimistic that India’s involvement in the field of tourism and hospitality industry would be enhanced.

Considering the fact of full vaccination of 5.9 lakh of the eligible citizens Mongolia is reopened for international air travellers by 10th May 2021, and resumed scheduled flights with countries, those recognize its immunization certificates for COVID-19, named International Travel Health Certificate (ITHC) I believe that it would be another favourable destination for their brothers and sisters in dharma.