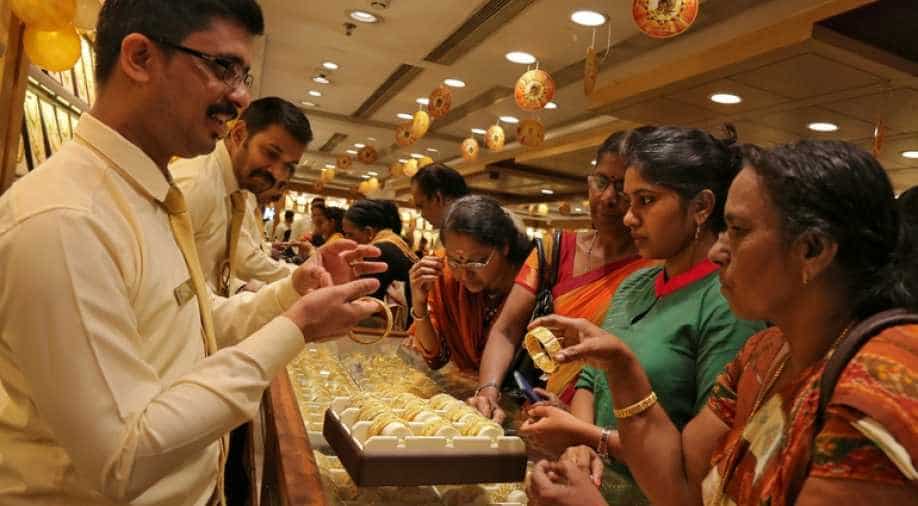 A salesman shows gold bangles to customer inside a jewellery showroom in Kochi. Photograph:( Reuters )

Demand for physical gold barely changed in major Asian hubs this week even as global prices weakened, while a correction in local rates in India prompted retail consumers and jewellers to start purchases.

"Demand has been improving. Retail buyers are making purchases for weddings," said Harshad Ajmera, the proprietor of JJ Gold House, a wholesaler in the eastern Indian city of Kolkata.

"Jewellers are comfortable making purchases around $1,300. They are making purchases as their inventory has already been depleted due to thin buying in last few weeks," said a Mumbai-based dealer with a private bullion importing bank.

In the March quarter, Indian gold demand fell 12 per cent from a year earlier to 115.6 tonnes, as jewellery demand dropped to the second-lowest level in 10 years, the World Gold Council said on Thursday.

But demand may improve through the year as positive monsoon rains and government efforts to raise farmer incomes could boost rural purchases enough to offset higher prices because of the weak rupee.

Meanwhile, benchmark spot gold prices eased on Friday, weighed down by a firmer dollar ahead of US&nbspjobs data, and were headed for a third consecutive weekly decline.

"The movement in gold is not too much. People seem to be waiting around these levels," said Ronald Leung, chief dealer at Lee Cheong Gold Dealers in Hong Kong.

In China, premiums ranged $8-$9 this week, unchanged from last week.

"China's 65 percent of annual consumption comes from the jewellery sector. Based on our reviews, jewellery sales during the public holiday (April 29- May 1) was quite well due to seasonality, but sales plummeted after the holiday," said Samson Li, an analyst with Thomson Reuters GFMS.

Premiums charged in Hong Kong were also unchanged from last week, at 50 cents to $1.50.

In Singapore, premiums were marginally higher at about 80 cents this week, compared with 60 cents-70 cents last week.

Physical demand, at least in Southeast Asia, was good this week because of lower prices, said Brian Lan, managing director at dealer GoldSilver Central in Singapore.

Gold continued to be sold at par with the global benchmark for the fifth consecutive week in Japan.