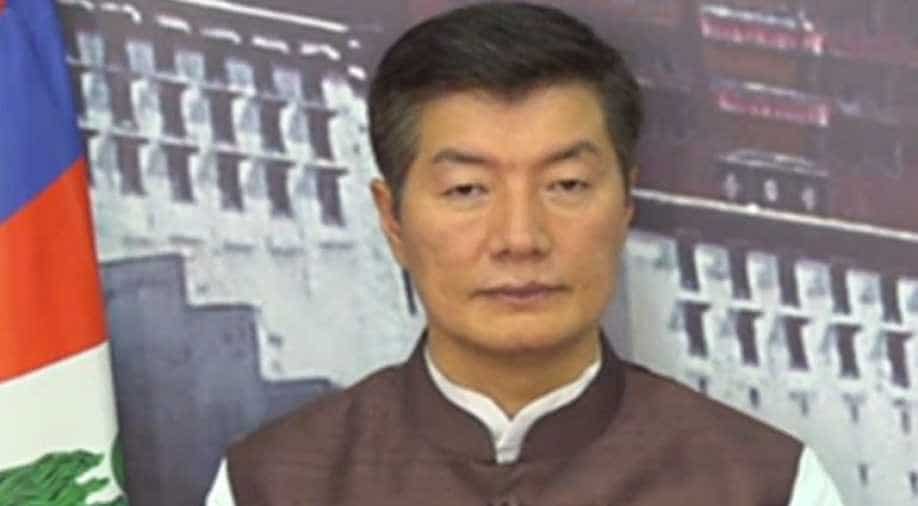 Speaking to WION's principal diplomatic correspondent Siddhant Sibbal, President of the Tibetan government in exile Lobsang Sangay said Beijing has been following a policy of co-optation which means buying of elites especially in countries like Nepal.

The Tibetan government in exile has warned that the region faces bleak future under Chinese expansionist policy.

Speaking to WION's principal diplomatic correspondent Siddhant Sibbal, President of the Tibetan government in exile Lobsang Sangay said Beijing has been following a policy of co-optation which means buying of elites especially in countries like Nepal.

He said, “The way Tibet was occupied, first they said they will build a road from china to Tibet this will bring prosperity to Tibetans. Once they build the road, they brought in trucks, tanks, guns and soon they occupied us."

On Hong Kong's security law, he said, Tibet was the first victim of the Chinese security law and if India plans to resolve its border issue with China, Tibet should be resolved first.

WION: China has been increasingly combative amidst COVID, why so?
Lobsang Sangay: China is facing a lot of pressure, especially external pressure because WHO members have passed a resolution to investigate the COVID crisis which originated in China and then they get blamed they tried to hide the spread of COVID initially from 3 weeks to 6 weeks. The whole world lost that time. Time to prepare to deal with COVID pandemic, so they getting blamed. COVID has impacted the global economy. All the countries in the world, are negatively impacted and they lost so much because of COVID. China is coming under pressure and trying to distract the international community --with specific countries from the South China Sea to the East China Sea to border with India. China is trying to distract it by with all this incursions and tragedy. So our condolences to all those family members to all those Jawans who died.

WION: Increased tension between India and China. How do you see the development?
Lobsang Sangay: For the last 60 years, we have been repeating this as a mantra and it’s a fact that, if you look at the map of China, the Han Chinese populated territory is only 40% of the area, rest 60% include Tibet--which is one-fifth of Tibet, Xinjiang, Inner Mongolia, Manchuria and all that. If you look at the Chinese empire it has expanded because of invasion and encroachment. After the occupation of Tibet, in the 60s, Chinese leaders have said Tibet is the Palm, now they have to go for 5 fingers--Ladakh, Nepal, Bhutan, Sikkim and Arunachal Pradesh. So in 2017, you have Doklam incident that borders Sikkim and Bhutan and then now you have in Ladakh. This is all part of the grand, long term expansionist strategy which they had and implementing now. It has turned violent in a recent case in Ladakh.

WION: Suggest to Nepal you would like to give?
Lobsang Sangay: To Nepal and all the neighbouring countries, we have been saying the same thing. The way Tibet was occupied, first they said they will build a road from china to Tibet this will bring prosperity to Tibetans. Once they build the road, they brought in trucks, tanks, guns and soon they occupied us. In the process, they have a very shrewd strategy, which is called elite co-optation--which is to buy off all the elites. Go after your political leaders, your business leaders, intellectuals, your journalist, and your Dharmic leaders. They buy of each of the sectors of the community which are elite at the top. So when the actual occupation happens, you realise that elite in the country is divided, one supporting china and one supporting own country. In all the neighbouring countries, this is the process, the strategy which they implement. They implemented in Tibet 60 years ago, they implementing it now in Nepal and all the countries around the world. Blueprint they use in Tibet, they used around the world including in Nepal. This is taking place in Nepal. What happened to Tibet, can happen to India, Nepal, Bangladesh, Sri Lanka, and the Maldives. Learn from us, be careful.

WION: You saying China buying Nepal's elite?
Lobsang Sangay: They do it everywhere. They do it in Europe, they do it Australia. The former FM of Austalia is the biggest consultant in support of the Chinese govt. You go to Europe, so many European countries--where former ministers are the best spokespersons defending china, being an advocate for Chinese investment, relationship with china. When you see this happening, in rich countries around the world, in Nepal, you won't be surprised they making efforts even in India. They do it all the time.

WION: Option in front of New Delhi to deal with China? Is a military option available?
Lobsang Sangay: The military option should be the last option and should be the last option. We believe and advocate in Ahimsa, non-violence. We advocate dialogue is the best way to solve any issue. We have to defend, your own country internally. Elite co-optation is taking place, with less success perhaps in India, but they do it. They try to influence and give propaganda. This is how they encroach within though the co-optation process. So India has to be very careful if these things are taking place or not.

WION: What is the future of Tibet?
Lobsang Sangay: Chinese are very powerful, economically, militarily we are weaker in that sense. They have destroyed 98% of monasteries and nunneries. They banned the practice of Buddhism in Tibetan plateau. 60 years have passed, Tibetan Buddhism has spread across the world. We have to rebuild major monasteries in exile, mainly in India. Now Buddism is back in Tibet in private social space, govt policy is still to destroy Buddhism. But if look as whole Buddhism is back in Tibet. This shows despite the efforts to wipe out Tibetan civilization we are back practising Tibetan Buddhism, wearing our own dress, eating our own food and Tibetan sense of identity is very strong in Tibet.60 Years later, we are still strong internally and externally because we have support across the world. Support is getting strong, from the European Parliament to the US. Chinese govt manipulated us into occupation and we have been the best spokesperson. Our future is hopeful.

WION: How will support New Delhi, do you see your role?
Lobsang Sangay: Our role has been clear. We have been saying the same thing, China says Tibet is its core issue, very important issue. India should say, Tibet, is a core issue for them, for the geopolitical issue. There was never border between India and China, it was a border between India and Tibet. Let us go back to 1940-50 you did not need policemen now you need battalions, regiments. India is spending billions of dollars, which was not necessary. Tibet acted as a buffer zone, it was the demilitarized border. If you solve the issue of Tibet, you can address the border issue. Awareness about Tibet is very minimal in India. If you go to America or Europe, there are Tibetan studies programme but in India how many major Indian universities have such a programme. Like 2017, Doklam incident, it’s a Tibetian word. Not many expertises know that. You have to create awareness among the general population, at least students and intellectuals should know what happened to Tibet so that you are better prepared. You must have such a programme at the university level.

WION: You saying India should junk one China policy?
Lobsang Sangay: One China policy was created for Taiwan because they have one china and 2 interpretation. Under this umbrella, Tibet and Hong Kong and other issues are put in. People in Taiwan, including the ambassador of Taiwan to India has said it is time for India to review one china policy. Taiwan, the main target is saying so, Indian govt should look into it why Taiwan is saying so.

WION: What would you say about Hong Kong?
Lobsang Sangay: People in Hong Kong advocating basic freedom, basic human right--right to freedom of speech, right to assembly, right to democracy. On national security, the law has been imposed. We are the first victims of national security law. So many security laws have been passed in Tibet, each time security law is passed, it essentially means security is more important than individual freedom, freedom of speech, unity more important than diversity. We have seen this in Tibet, people of Hong Kong should study the origin of security law in Tibet and how it is being interpreted now, explained one way and exploited. You have to issue of Tibet to understand the mindset and manipulation of the Chinese govt. Be it India, Nepal or Hong Kong. People need to pay issue. Explain Tibet is a zone of peace, demilitarized zone.

WION: Hopeful the grand building behind you the Potala place, you will be able to enter it one day?
Lobsang Sangay: That is why I am sitting next to the building with the national flag. This is our symbol, our peaceful, non-violent movement led by his holiness 14th Dalai Lama of Tibet. One day soon, you will see us back in Tibet and his holiness Dalai Lama in the Potala Building.