They help make iPhone, but here's where they stayed: Inside Foxconn Chennai offsite dorm room 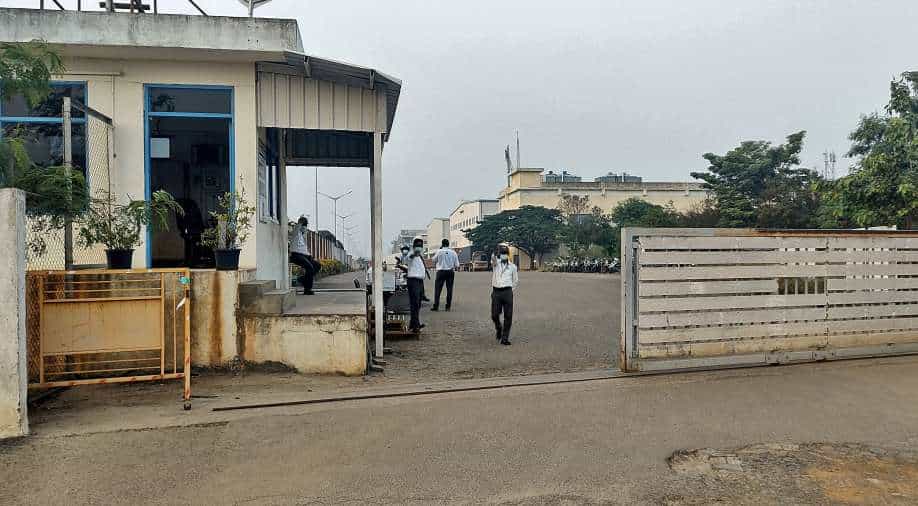 (File photo) Private security guards stand at the entrance of a closed plant of Foxconn India, near Chennai Photograph:( Reuters )

WION visits a dormitory where the women were forced to stay in cramped spaces amid poor living conditions.

WION visited one such dormitory where the women staff had been staying. During the visit, it was found that the women were made to stay in crammed spaces and poor conditions.

During the visit, a team of Tamil Nadu Police personnel were seen occupying the rooms who had placed their belongings there. However, the cops refused to divulge the reason for their presence there.

Thread: (1/n)What I witnessed at an offsite dormitory where #Foxconn women workers stayed, near the Sriperumbudur factory

Each dorm room was barely 150sqft and up to 7 women used to stay in the room, without bed/mattress, under a single fan. No attached bath/wash#Chennai pic.twitter.com/8ViMpvUKEm

The dormitories building was a short walk away from and fairly unnoticeable from the nearby main road. Painted in pale yellow, the three-storeyed appeared fairly clean, but offered a vastly different picture while entering the rooms. With over 50 rooms, the building was once occupied by over 250 women workers.

All of 150sqft and fitted with a lone ceiling fan, each room is learnt to have been used by up to seven women workers. Despite having a window, owing to a fairly high compound wall blocking it, the ground floor rooms had hardly any natural ventilation.

There were no beds or mattresses in any of the rooms. Neither did they have attached bathrooms or toilets. The toilets, bathrooms and the washing area were at the corner of the building.

At the other corner of the building, there was a space that was used as a cooking area. It was just an open space with large vessels that hardly had any kitchen facilities. Here too, the cleanliness and hygiene standards were questionable. Parts of the cooking area were surrounded by the compound walls whereas another side was covered with a tin sheet.

Just a few steps from the cooking area was a closed toilet that looked extremely unclean even from the outside. Nearby, there was a passage that led to the common washrooms. The rear portions of the building seemed to lack a concrete boundary wall instead, there were only tin sheets erected to purportedly serve the same purpose.

(6/n)
Some pics from around the place to give an overall feel of why the women were totally distraught by the facilities provided or the lack thereof...

Foxconn technology group issued a statement saying, “The safety and wellbeing of our employees is our top priority. We have been investigating recent issues at our Sriperumbudur facility in Tamil Nadu and have found that some offsite dormitory facilities do not meet the required standards.”

Besides apologising for the plight of their employees, the company also said they were taking immediate steps to enhance the facilities and services at remote dormitory accommodations.

In addition to restructuring the local management team, Foxconn said that it would also continue to pay its employees while making necessary improvements before restarting operations.

According to an Apple spokesperson, the tech giant has dispatched independent auditors to undertake additional detailed assessments following recent concerns about food safety and accommodation conditions at Foxconn’s Sriperumbudur unit.

It was also said that some of the remote dormitory accommodations and dining rooms being used for employees did not meet their requirements.

“Foxconn’s Sriperumbudur facility has been placed on probation and we will ensure our strict standards are met before the facility reopens. We will continue to monitor conditions closely” the statement added.

Earlier this month, nearly 150 women workers of Foxconn staying at an offsite dormitory had fallen ill and were admitted to hospitals, owing to food poisoning. They alleged that the food provided to them at the dining facility in the dormitory was unhygienic.

Turning up in large numbers, the women workers had blocked the arterial Chennai-Bengaluru highway and protested against their Foxconn management, demanding better facilities.

According to Kannan, deputy general secretary, Centre of Indian Trade Unions (CITU), Tamil Nadu, the details of the recent instance of food poisoning were not shared with the victims’ parents, which then led to protest.

“Not only iPhone but all brands of phones are also being manufactured at the Foxconn Sunguvarchatram plant. Nearly 10,000 employees are engaged in production activity here, but they all have been hired on a contract basis, despite doing a job that is of perennial nature. This is a major concern for workers to come out and protest,” Kannan told WION.

On behalf of CITU, he emphasised that the Tamil Nadu government, Apple and Foxconn management come forward and resolve the issue immediately.