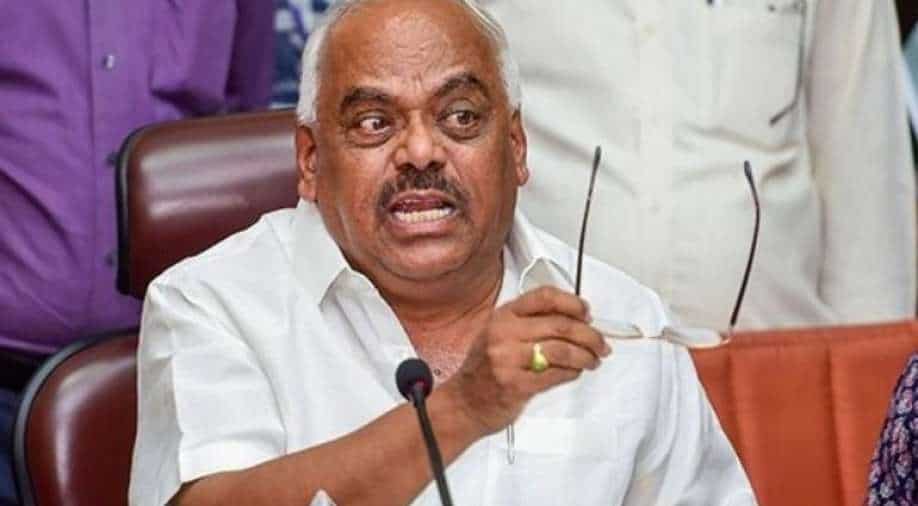 A number of women MLAs from both the Congress and BJP have expressed their concern that the sensitive and serious subject of 'rape' was being discussed in a light-hearted manner. They condemned the casual and chauvinistic approach to what they termed "an inhuman act" that needs to be looked at seriously. Photograph:( Twitter )

An Indian politician, Ramesh Kumar, has come under fire over his callous remark about rape in the southern state of Karnataka.

Former assembly speaker and senior leader of the Congress party, Kumar while speaking during the state assembly session on Thursday, had stated, "When rape is inevitable, lie down and enjoy it."

Since then, he has apologised for his remark. Expressing regret, on Friday, Kumar said "My intention was never to demean the prestige of this House or behave in an inferior way. I will not defend myself. I tender my sincere apology for my utterance during the proceedings of the House if it has hurt people from any part of the country."

However, the casual approach of the leaders in the session on a sensitive subject like rape has been criticised by progressive thinkers and women activists.

"It is a matter of dignity and respect for the House. This example should not have been given. We did not expect such a demeaning comment from a senior leader like Ramesh Kumar. If at all he had made it inadvertently, he should gracefully withdraw it," she demanded.

The remark was made as legislators were vying to initiate a discussion about the flood situation in the state and what relief measures should be taken.

In the Karnataka state assembly, after repeated appeals for decorum went unanswered, speaker Vishveshwara Hegde Kageri requested that the members decide amongst themselves before they voiced their concerns.

At this juncture, Speaker Kageri addressing former speaker Ramesh Kumar stated: "You know I am now in 'let's enjoy the situation` mode. I am finding it very difficult to control the House. I will have to throw all rules, guidelines into the air and allow everyone to talk on the topic of their choice at the session. I will have to say yes to everything."

At this, Ramesh Kumar stood up and addressed the chair saying: "There is a saying. When rape is inevitable, lie down and enjoy it." To the shock of women MLAs, he further stated "that's exactly the position into which you are."

Surprisingly, the speaker Kageri smiled at the remark and the whole group laughed along with him.

"We are seeing casual remarks on women being made in common situations. While using abuses they address females, the issue needs to be addressed," the CITU state president opined.

A number of women MLAs from both the Congress and BJP have expressed their concern that the sensitive and serious subject of 'rape' was being discussed in a light-hearted manner. They condemned the casual and chauvinistic approach to what they termed "an inhuman act" that needs to be looked at seriously.

Smriti Irani, Union Minister for Women and Child Development, also condemned the Karnataka Congress MLA's remarks, calling them "shameful", and daring Congress to expel him from the party.

On social media too this controversial, insensitive remark has drawn sharp criticism, with netizens not only calling out Kumar, but also the assembly speaker, Vishveshwara Hegde Kageri who hails from the BJP party.

Why only Ramesh Kumar?!

Aren't people writing letters to Sonia Gandhi @priyankagandhi @RahulGandhi about Ramesh Kumar on what he said or are we afraid you politicians ? What can't the women of both houses roundup these people at the gate of the parliament and ask #SackRameshKumar to be sacked

Amit, what the hell was BJP Speaker Kageri doing, he also laughed. I am a hardcore BJP supporter, but this disappoints.Sack Kageri and condemn in the strongest terms what Ramesh Kumar did. You make a fool of yourself by only condemning Ramesh Kumar but not calling out BJP Speaker

Congress should expel Karnataka MLA K.R. Ramesh Kumar from party for his unfortunate statement on rape, even after his apology.

Criminals/Misogynist are in Position of policy making. #RameshKumar mindset is disgraceful, toxic..He should be expelled from politics for normalizing Violence against women also the speaker tolerating such behaviour in the assembly. @RahulGandhi @priyankagandhi @INCIndia https://t.co/qrHjBcTSPY