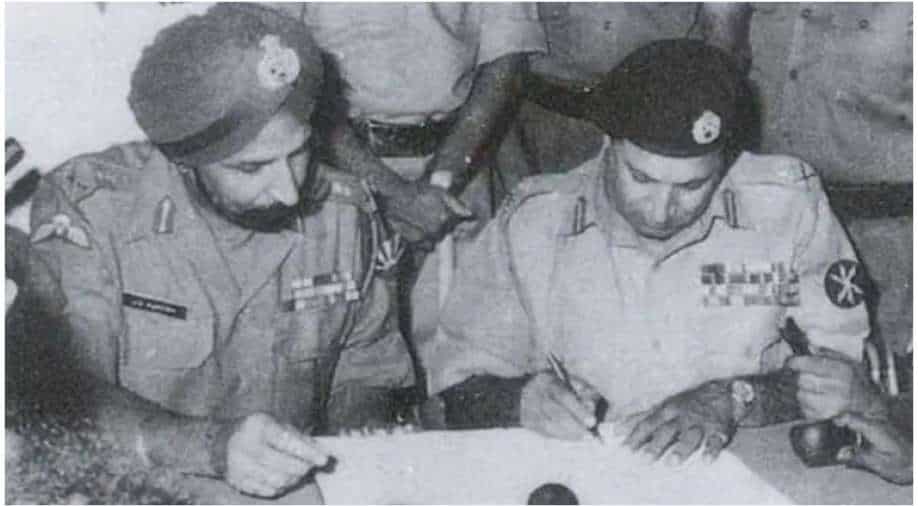 Indian President Ram Nath Kovind is in Dhaka on the occasion of 50th Vijay Divas or Victory Day. The day represents glory for India and Bangladesh. It is a golden chapter for Indian Army and Bangladesh's Mukti Bahini.

What is Vijay Divas?

Vijay Divas or Victory Day represents victory of Indian Army and Mukti Bahini against Pakistani forces that led to the independence of Bangladesh. On December 16, 1971, Indian Army defeated Pakistan, carving out a new nation of Bangladesh. The 1971 war is a matter of pride for India as 93,000 Pakistani troops stationed in Bangladesh (then East Pakistan) surrendered before Indian Army.

When did war leading to Vijay Divas start?

What happened on Vijay Divas in 1971?

The day has been chronicled as biggest military surrender after Second World War. Major-General  Amir Abdullah Khan Niazi was leading Pakistani forces in East Pakistan. He had 93,000 troops under his command at the time of surrender. It is often mentioned with surprise how a Pakistani general leading such a large force could surrender unconditionally. The day, therefore, lives in infamy for Pakistani army.

The moment has been immortalised in an iconic photo. The instrument of surrender was signed in Ramna Race Course in Dacca (Now called Dhaka).

1971 war was a crushing blow to Pakistan and its military. However, Pakistani military and Pakistani policies were responsible for spread of anti-Pakistan sentiment in Bangladesh.

Sheikh Mujibur Rahman, who is called Bangabandhu the father of the nation of Bangladesh, clinched electoral victory for his party in 1970.

However, instead of letting the victors rule, Pakistan military used force to sway the outcome.

This resulted in a massive exodus of people from Bangladesh to India. This forced India to intervene.