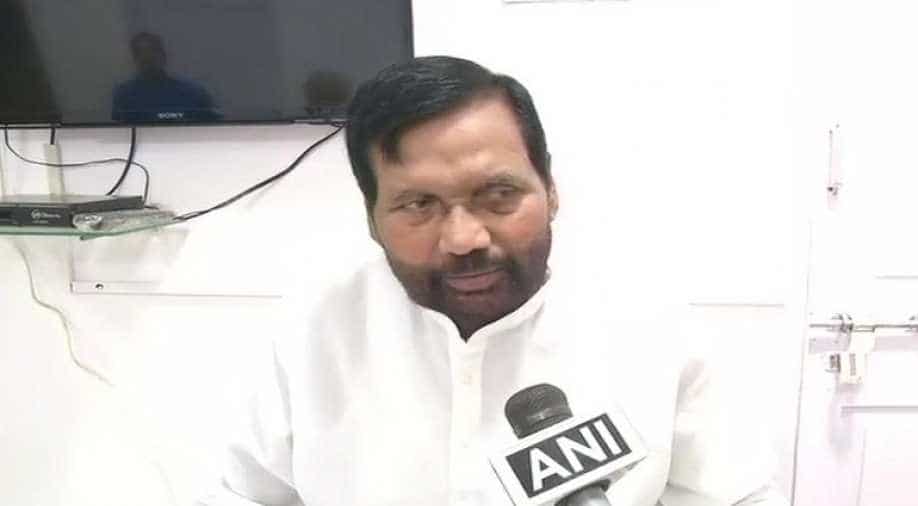 Union minister  Consumer Affairs Ram Vilas Paswan on Sunday expressed his unhappiness over some of the secular leaders' voice being suppressed in BJP.

Paswan also appealed to the BJP top brass that there was a need to change the perception in terms of minorities, Dalits.

They (BJP) need to change mass perception in terms of minorities, dalits. Aren't there secular leaders in BJP?There are people like Sushil Modi,Ram Kripal Yadav,what happens is that their voice gets suppressed&there are others whose voice gets attention:Union Min Ram Vilas Paswan pic.twitter.com/1KT1cJrwLg

''Aren't there secular leaders in BJP? There are people like Sushil Modi, Ram Kripal Yadav. What happens is that their voice gets suppressed and there are others whose voice gets attention,'' he said.

Reports said that the LJP chief also cautioned few ‘hardliner’ leaders in the BJP to refrain from making ‘off- the- cuff’ statements in order to prevent distancing of voters of certain sections of the society including Muslims.

Paswan’s statement comes on the backdrop of BJP's defeat in bypolls to two high- profile parliamentary constituencies- Gorakhpur and Phulpur in Uttar Pradesh and Araria constituency n Bihar. The bypolls were held on March 11 and counting and results were declared on March 14.

Incidentally, BJP Bihar chief Nityanand had stirred a controversy by saying in an election meeting on March 9 that ‘Araria will become the den of ISI if RJD candidate won’. An FIR was also lodged against him over his ‘provocative” statement on March 10 on charges of violation of model code of conduct.

In a similar instance, firebrand BJP leader and union minister Giriraj Singh also said in New Delhi on March 15 that Araria will become ‘terror hub’ with the victory of RJD’s candidate in the bypolls to the Muslim- dominated constituency.