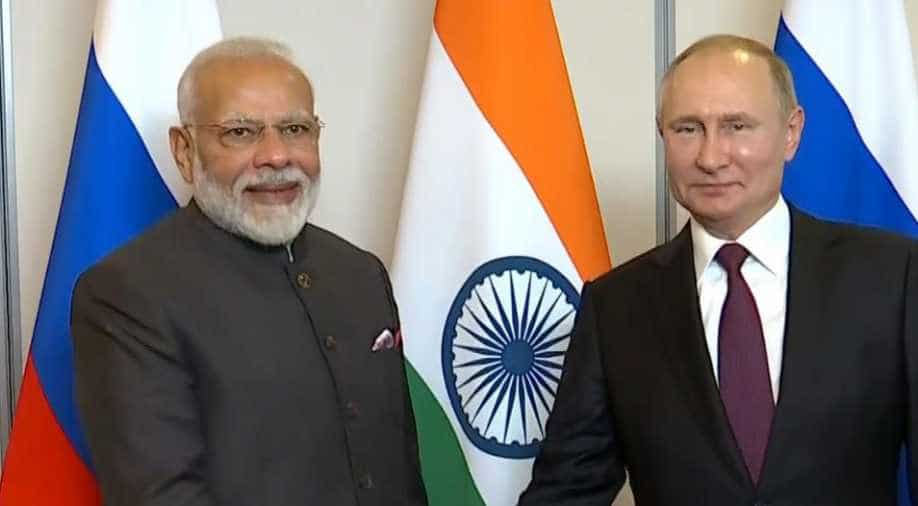 Prime Minister Narendra Modi arrived in Brasilia on Wednesday on a two-day official visit to attend the annual session of BRICS.

Prime Minister Narendra Modi on Wednesday held bilateral meeting with Russian President Vladimir Putin on the sidelines of the BRICS Summit in Brazil.

The 11th BRICS summit will focus on strengthening ties among the five countries in key areas such as digital economy, science, and technology, as well as in building mechanisms for counter-terrorism cooperation. The theme of this year's summit is 'Economic Growth for an Innovative Future'.

Taking to Twitter upon his arrival, Modi expressed hope that the summit will enhance cultural and economic linkages between member nations.

"Reached Brazil to take part in the BRICS Summit. Will also meet various world leaders during this visit. I am sure the BRICS Summit will enhance cultural and economic linkages between BRICS nations," Modi tweeted.

This year the joint working group on counter-terrorism has decided to constitute five sub-working groups on counterterrorism in the following areas: terrorist financing, use of the Internet for terrorist purposes, countering radicalisation, issue of foreign terrorist fighters and capacity-building, the Ministry of External Affairs said.

This is Prime Minister's second visit to Brazil and his first visit after the new administration led by president Bolsonaro assumed office on January 1, 2019, the ministry said.

US working 'productively' with Pakistan to confront terrorists operating on its soil: Trump

Amit Shah chairs meet with Kejriwal, others to discuss situation in Delhi