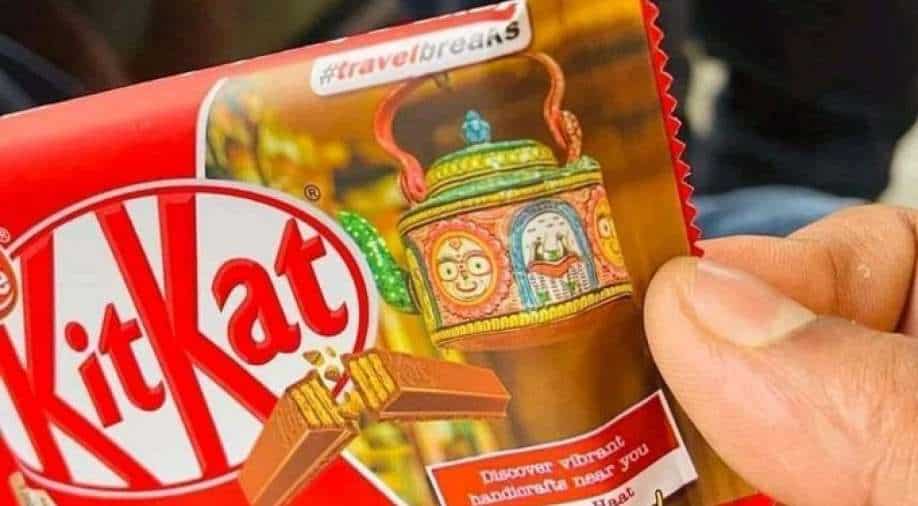 The Indian version of the wrapper had images of Hindu deities Jagannath, Balabhadra and Subhadra to celebrate the crafts of the Indian state of Odisha

Nestle on Friday said that it has withdrawn a special range of its KitKat chocolate bar wrappers featuring Hindu Gods following accusations of hurting religious sentiments.

Nestle had recently released a limited range of chocolate wrappers globally which had photos of artwork by local artisans, reported The Guardian.

The Indian version of the wrapper had images of Hindu deities Jagannath, Balabhadra and Subhadra to celebrate the crafts of the Indian state of Odisha.

However, the idea of putting Hindu deities on wrappers didn’t sit well with Indians, as many while applauding the company for promoting the local culture also criticised that the cover might end up in “dustbins, drains, gutters”, which would be disrespectful of the gods and the Hindu faith.

It is a honor to see our Odisha culture & lord jagannath, balabhadra & subhadra on ##KitKat but plz think once, whn some1 will eat 🍫 & will throw the wrapper into dustbins, drains, gutters & many will walk on it 😭. Jagannath family will be happy with it. @CMO_Odisha @PMOIndia pic.twitter.com/10xPKsdz5c

Please remove the Lord Jagannath, Balabhadra and Mata Subhadra Photos In Your @kitkat Chocolate Cover . When People Are Finished The Chocolate They Are Through The Cover On Road, Drain, Dustbin, Etc . So Please Remove The Photos . @Nestle @NestleIndiaCare #Odisha#JayJagannath pic.twitter.com/9vFy0trazw

Nestle said the intention had been to “celebrate the culture of Odisha with designs on packs representing ‘Pattachitra’, an art form uniquely identifiable by its vivid imagery”.

Nestle said that as “pre-emptive action”, it had now recalled the KitKat range from the market.

“We wanted to encourage people to know about the art and its artisans. We do understand the sensitivity of the matter and regret if we have inadvertently hurt people’s sentiments,” the company said in a statement.