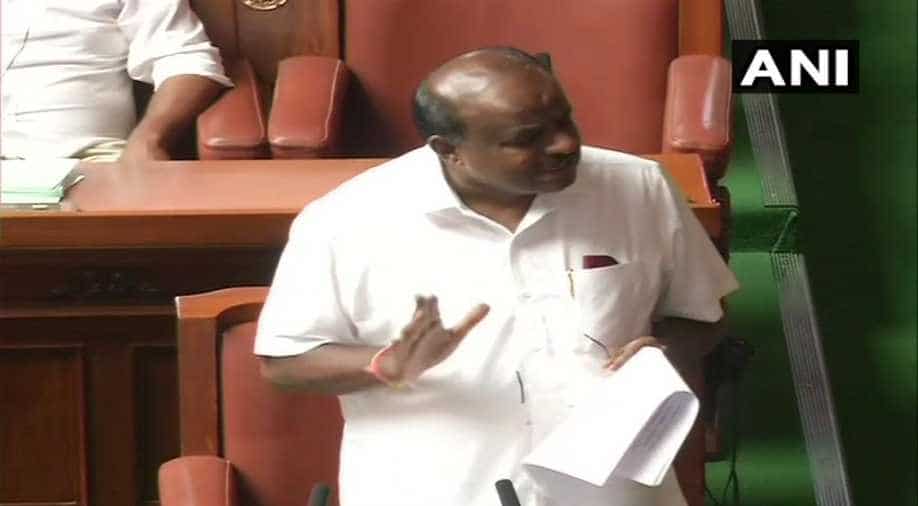 An earlier letter to the Speaker by Governor Vajubhai Vala to conduct the floor test by the end of Thursday was merely dismissed as a suggestion and not an order.

It was an anticlimactic Thursday in Karnataka as a combative Congress-JD(S) coalition delayed the trust vote by another day. However, after a day of chaos, the Governor has intervened with a letter to Chief Minister HD Kumaraswamy, asking him to hold the floor test by 1.30pm on Friday.

An earlier letter to the Speaker by Governor Vajubhai Vala to conduct the floor test by the end of Thursday was merely dismissed as a suggestion and not an order. "Though a message as contemplated under Article 175(2) is sent to the Speaker, I am informed that the House is adjourned today i.e, 18-07-2019. Under these circumstances, I require you to prove your majority on the floor of the house on or before 1.30 pm tomorrow" stated the Governor's letter.

The letter will further fuel debate in the house, with arguments also raging over the ambiguity over the constitutional right of a party to issue whip to its members during a trust vote. A whip, when issued, compels members to attend the house on the day of trust vote and vote in favour of the said party.

However, the Supreme Court verdict on Wednesday stated that the rebelling MLAs (whose resignations are yet to be accepted) cannot be compelled to attend the session. "SC says 15 MLAs ought not to be compelled to participate in the ongoing session of the house and an option should be given to them to attend or opt out. The SC order is curtailing my right under the 10th schedule of the constitution... Without even making me a party, SC has given this order" said CLP leader Siddaramaiah. In response, "Let me make it abundantly clear that this office is not restraining you (CLP leader) from acting as per your role... If a member of the house needs a leave of absence from the house, he should write a letter to me. I am at liberty to scrutinise the reason and will decide on whether to grant or not grant leave" said Speaker Ramesh Kumar.

Adding to the woes of the coalition government, another MLA Shrimanth Patil from Kagwad constituency slipped out from the resort where all the Congress MLAs had been holed up since Friday. While Patil sent a suspicious-looking letter without date or letterhead to the Speaker citing ill-health, Congress cried foul and claimed to be in possession of documentary evidence that proves the BJP had whisked him away.

Shortly afterwards pictures of BJP leader Lakshman Savadi escorting MLA Patil to the airport surfaced, adding more ammunition to the high-octane drama inside the Karnataka assembly. "We were all with Shrimanth Patil last night and he had dinner with us. Later, I was informed he is missing from the resort. He was healthy, but look at what the BJP has done" said Dinesh Gundu Rao, KPCC President.

Later in the night, the BJP released a counter video showing Shrimanth Kumar with his son at a hospital in Mumbai. Amidst the arguments and counter-arguments, Ramesh Kumar directed the Home Minister to dig into the truth behind Patil’s sudden disappearance from Bengaluru and submit a report on the same. With Patil gone, the coalition seems to have lost 20 votes that it had in its favour just a month ago.

Even as the pitched battle was on in the house, Ramesh Kumar sought assistance from the Advocate General Udaya Holla on the ambiguity over whip and its impact on the trust vote. The details of the discussion, however, remain undisclosed. As the day was closing with no signs of a trust vote, BJP leader BS Yeddyurappa, who hopes to be the next Chief Minister, thundered that his party leaders will stay put in the house all night as a mark of protest.

"Voting should take place at the earliest. Even the Governor has sent a message that the voting should have been completed by the end of the day. Without respecting the Governor’s words or the Supreme Court’s decision, they are discussing extraneous matters and using it as a delaying tactic. In protest the BJP has decided to go ahead with an overnight dharna inside the Vidhana Soudha" said Suresh Kumar, BJP leader.

In the 224 member house excluding the speaker, the coalition has 116 members. But looking at Thursday’s absentees, the house strength is down to 204, with the coalition having just 99 members, and the BJP sitting comfortably at 107. So then why is the coalition delaying the trust vote when the numbers clearly show the end is near? HD Kumaraswamy’s actions can be perceived in two ways. Firstly, he could be using the delay to pressurise the rebels with the threat of disqualification, hoping it will prompt them to return to the party fold. When an MLA gets disqualified he becomes ineligible to hold a ministership or position in the government until reelected.

Secondly, Congress and JD(S) are seeking to undo the Supreme Court order insulating the rebel MLAs, that does not compel them to attend the session despite a whip. If the Congress can get the Supreme Court to uphold the right of a party to issue whip to all its members(rebel or not), then the Congress & JD(S) get solid grounds to move disqualification proceedings against the dissidents.

Currently, disqualification petitions have been submitted on relatively flimsy grounds of the MLAs skipping CLP meeting. Simply put, if Kumaraswamy knows he is going down, he might want to take those responsible down with him.