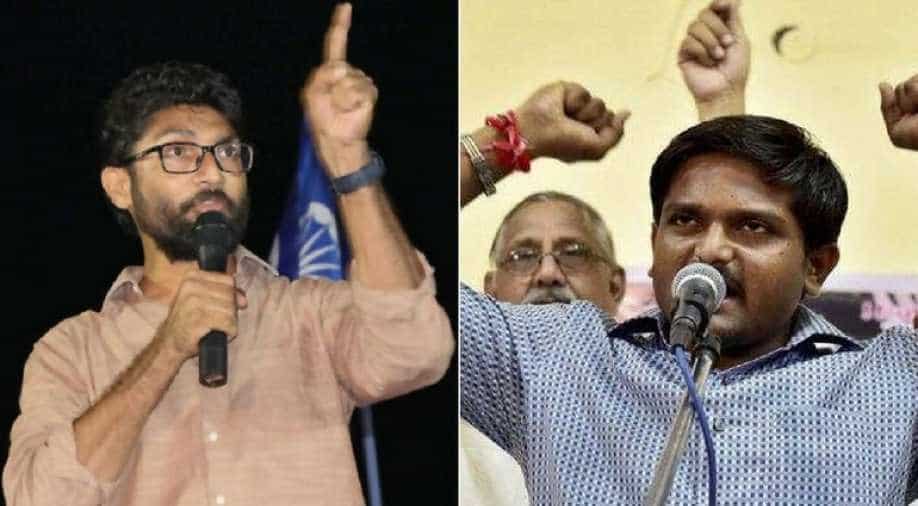 'Their development model is nothing but a deception and hence we were able to stop BJP from reaching the three-digit mark,' said Hardik. Photograph:( Zee News Network )

They might not have succeeded in evicting the BJP from Gujarat but Vadgam's newly-elected MLA Jignesh Mevani and Patidar Anamat Andolan Samiti (PAAS) leader Hardik Patel feel their hard work paid off with the party limited to the two-digit mark.

While campaigning, Jignesh and Hardik left no stone unturned to highlight the condition of the poor under the BJP.

The BJP retained Gujarat for a sixth consecutive time, but with its lowest tally ever.

With the results out, Jignesh and Hardik spoke to Zee Kalak.

"During election campaigning, we tried making BJP realise that they haven't done anything fruitful which benefitted the common man of Gujarat," Hardik said.

"Their development model is nothing but a deception and hence we were able to stop BJP from reaching the three-digit mark," he added.

Jignesh, who won the Vadgam seat by more than 19, 000 votes, had similar views on the BJP's win.

"BJP's arrogance of winning 150 seats in elections has been broken into bits and pieces. The results are shameful for them, despite having ruled the state for last 22 years," he said.

Talking of his future endeavours as a politician, Jignesh said he started working on his poll promises from day one.

He has written to the Palanpur collector to improve the condition of roads in six villages.

He also gave his assurance that he would start the 108 ambulance facility to the villages and, if required, raise the issue in the assembly.

Hardik meanwhile said that politicians like Jignesh and Alpesh Thakor will make for a strong opposition in the state assembly.

The contest between the BJP and Congress had swung like a pendulum for a large part of the day on Monday when the votes were counted.

The BJP finally won but commentators are saying the Congress emerged victorious, with its vote share going up from 38 per cent in 2012 to 41.5 per cent in 2017.