Ivanka Trump remembers Sushma Swaraj, calls her 'champion for women in India and across globe' 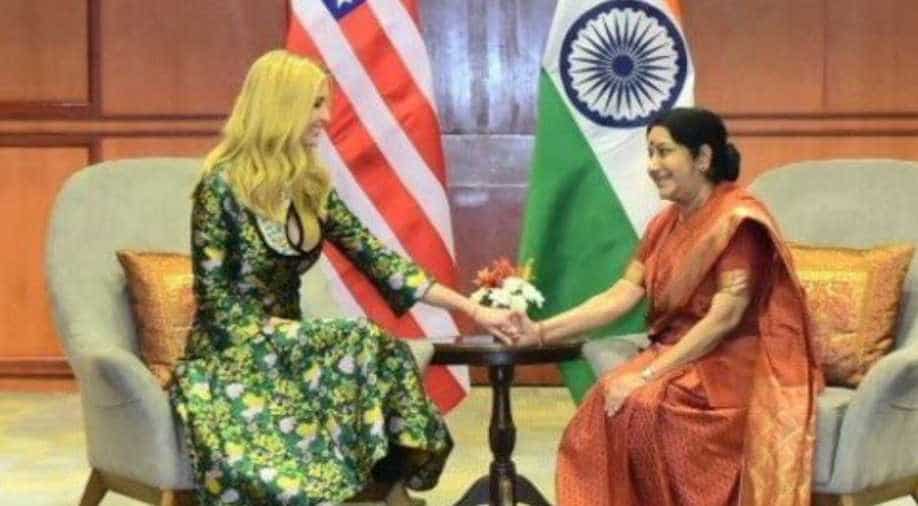 'It was an honour to know her,' read her tweet which also included pictures of her with Swaraj.

Ivanka described Swaraj as a "champion for women in India and across the globe", adding that India has lost a "warm and dedicated leader" in her loss.

"It was an honour to know her," read her tweet which also included pictures of her with Swaraj.

The country came to a standstill when the news of former external affairs minister Sushma Swaraj's sudden demise made headlines on Tuesday night.

"Iron lady", "affable person", "extraordinary parliamentarian", "prolific orator" were some of the phrases of praise used for Swaraj in her memory by political leaders, including Prime Minister Narendra Modi.

With the passing of former Minister of External Affairs Sushma Swaraj, India has lost a warm and dedicated leader and public servant.
Sushma Swaraj was a champion for women in India and across the globe, and it was an honor to know her. pic.twitter.com/U1X25nrMh4

Besides her strong personality and her indelible contribution to the growth of the Bharatiya Janata Party and her service to the nation, Swaraj will also be remembered as a soft-spoken person who bore empathy and worked tirelessly.

Many remember her as the most approachable foreign minister, who responded to every distress call addressed to her with utmost urgency and sensitivity - a minister who brought foreign policy to aam admi.

From the country's tallest leaders to the common man, all mourned her loss and condoled her sudden demise. Social media was flooded with posts in her memory.
Prime Minister Narendra Modi took to Twitter on late Tuesday night and in a series of tweets, condoled her sudden demise.
"A glorious chapter in Indian politics comes to an end. India grieves the demise of a remarkable leader who devoted her life to public service and bettering lives of the poor. Sushma Swaraj Ji was one of her kind, who was a source of inspiration for crores of people," his tweet read.
Swaraj had been a seven-time Member of Parliament (MP) and a three-time MLA.

Hours before her death, Swaraj congratulated the central government for its historic decision to abrogate Article 370.
“Narendra Modi ji - Thank you Prime Minister. Thank you very much. I was waiting to see this day in my lifetime,” she said in her tweet.
Swaraj was rushed to AIIMS Delhi on Tuesday evening on having a cardiac arrest.

She was cremated with full state honours on Wednesday at Lodhi Road crematorium.