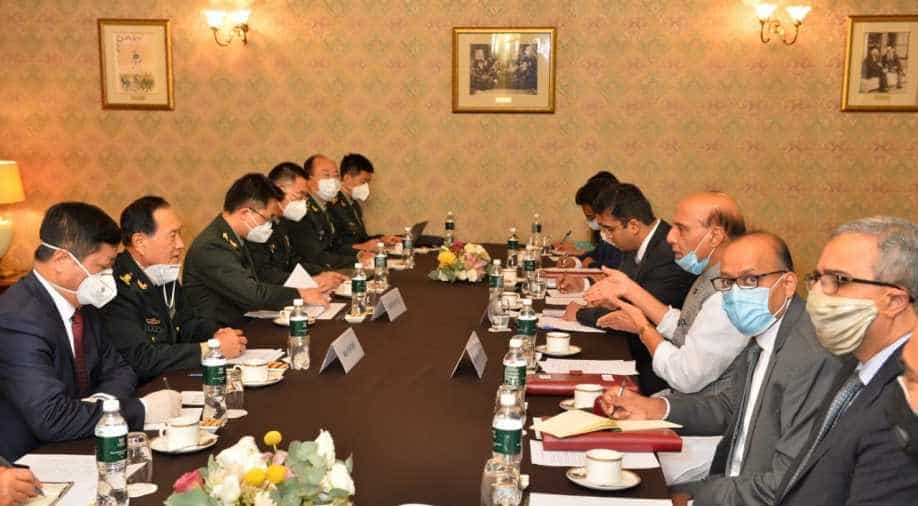 A picture from the meeting Photograph:( WION )

India's defence minister Rajnath Singh met his Chinese counterpart on Friday in Moscow on the sidelines of the Shanghai Cooperation Organisation or the SCO meet.

The meeting lasted for 2 hours and 20 minutes.

The meeting between Raksha Mantri Shri @rajnathsingh and Chinese Defence Minister, General Wei Fenghe in Moscow is over. The meeting lasted for 2 hours and 20 minutes.

Singh and Wei are in Moscow to attend a meeting of the SCO defence ministers which took place earlier in the day.

This was the first high-level in-person meeting between the two sides amid the LAC row.

What transpired in the Rajnath-Fenghe meet is still not known, but it is expected to ease the situation at the line of actual control (LAC) in eastern Ladakh.

Indian and Chinese troops are engaged in a bitter standoff in multiple places in eastern Ladakh.

Tensions flared up in the region after China unsuccessfully attempted to occupy Indian territory in the southern bank of Pangong lake five days ago when the two sides were engaged in diplomatic and military talks to resolve the festering border row.

India occupied a number of strategic heights on the southern bank of Pangong lake and strengthened its presence in Finger 2 and Finger 3 areas in the region to thwart any Chinese actions. China has strongly objected to India's move. However, India has maintained that the heights are on its side of the LAC.

India has also rushed in additional troops and weapons to the sensitive region following the Chinese attempts.

Last four months also saw the Galwan incident -- on June 15 -- in which India lost 20 soldiers. China also suffered casualties but has been silent on the number.

India had received a request from China for a meet with Rajnath Singh when he was in Moscow for victory day celebrations earlier this year. However, no meeting happened then.