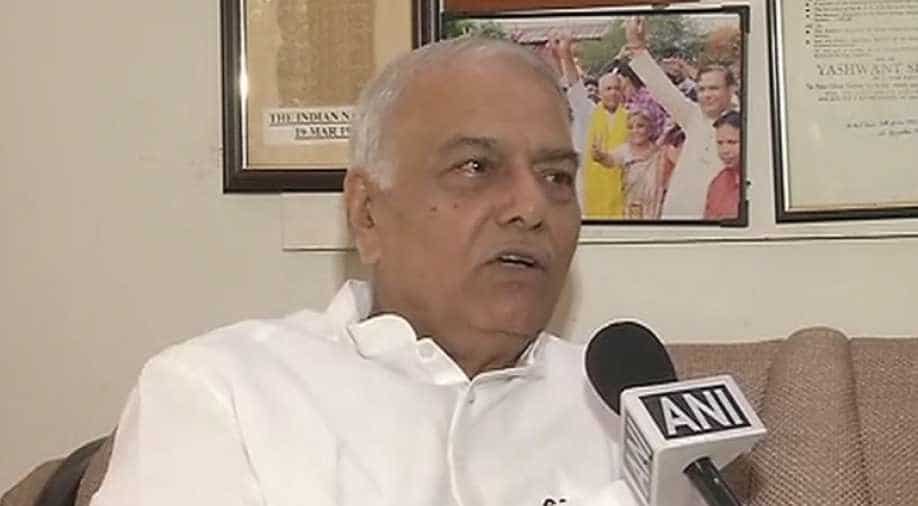 Senior BJP leader Yashwant Sinha on September 28 reiterated his stance that the economy is in shambles particularly because of the policies of finance minister Arun Jaitley.? Photograph:( ANI )

Senior BJP leader Yashwant Sinha has fired a fresh salvo at the BJP government, reiterating his stance that the Indian economy is in shambles particularly because of the policies of finance minister Arun Jaitley.

In a rejoinder to the BJP which said that structural reforms like demonetisation and GST would reap benefits, in the long run, the former finance minister quoted economist and philosopher John Maynard Keynes and stated, "In the long run we are all dead."

"Demonetisation shouldn't have been brought when the economy was weak, its effects were yet to subside and GST served as the second big blow," Yashwant Sinha said.

The former finance minister added that he disagreed with home minister Rajnath Singh and railways minister Piyush Goyal when they said that India was the backbone of the world's economy.

"Maybe Rajnath Singh and Piyush Goyal know more economy more than me, so they think India is the backbone of world's economy. I politely disagree," Mr Sinha said.

Earlier today, Minister of State for Civil Aviation and Yashwant Sinha's son Jayant Sinha had countered his father's criticism that the slowdown in GDP growth rate was because of demonetisation and the recently-introduced Goods and Services Tax (GST).

He had said GST, demonetisation and digitisation were structural reforms that were necessary for transforming the economy in the long term and that GDP growth of one or two quarters was insufficient to ascertain the long-term impact of these measures.

Yesterday, Rajnath Singh said the Indian economy is the fastest growing in the world. Piyush Goyal had said there was bound to be uncertainty when transformative changes were made.