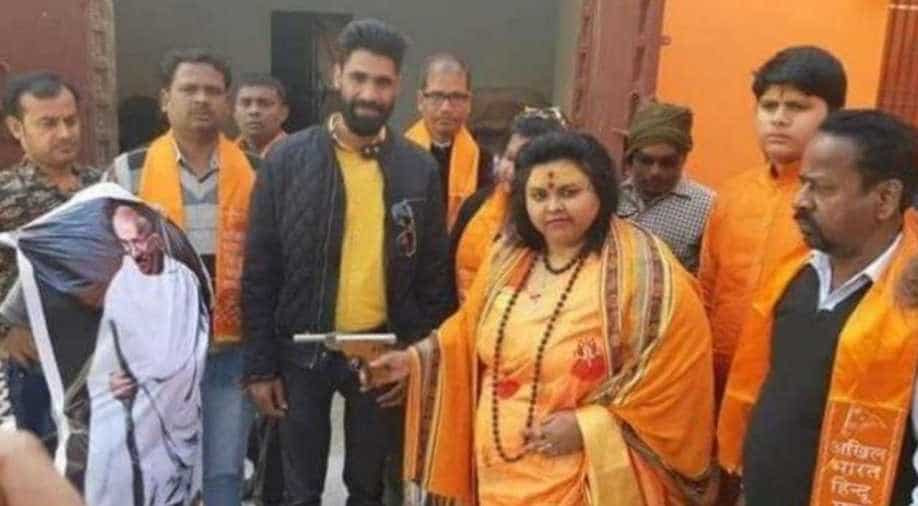 The suspects, allegedly belonging to the right-wing All India Hindu Mahasabha, fired at the effigy before setting it ablaze Photograph:( DNA )

The suspects, allegedly belonging to the right-wing All India Hindu Mahasabha, fired at the effigy before setting it ablaze on Wednesday, police said

Five people have been arrested for allegedly burning an effigy of Mahatma Gandhi, in an enactment of his assassination on his death anniversary, officials said Thursday.

The suspects, allegedly belonging to the right-wing All India Hindu Mahasabha, fired at the effigy before setting it ablaze on Wednesday, police said.

They shouted slogans against Gandhi and in praise of his killer Nathu Ram Godse during the act, a video which surfaced later suggested.

The charges against the men include promoting hatred and disrupting harmony, police said.

A purported video of the enactment of Gandhi's assassination was circulated on social media, with the right wing-group drawing massive condemnation.

Police Wednesday registered a case against 13 people, including the group's national general secretary Puja Shakun Pandey, who was seen firing at the effigy in the video, the officials said.

"We are taking this matter seriously and action will be taken against all those found guilty," Aligarh's Senior Superintendent of Police Akash Kulhary said.

Two of the accused, Manoj, who had set the effigy on fire, and Abhishek were arrested Wednesday, another officer said.

"This morning, we arrested Gajendra, who is locally called 'Vakil saheb'. He had also opened fire at the effigy along with Pandey," Additional Superintendent of Police Neeraj Kumar Jadaun told.

"Two more accused were arrested later this evening. They have been identified as Harishankar Sharma and Rajeev, the tall man with a beard and black jacket, as seen in the footage," he said.

They have been booked under the Indian Penal Code Sections 153A (promoting enmity between different groups and doing acts prejudicial to maintenance of harmony) and 295A (deliberate and malicious acts, intended to outrage reli?gious feelings of any class by insulting its religion or reli?gious beliefs), 147, 148, 149 (related to rioting), Jadaun said.