Finance Minister Sitharaman to present Union Budget 2021 today; all you need to know 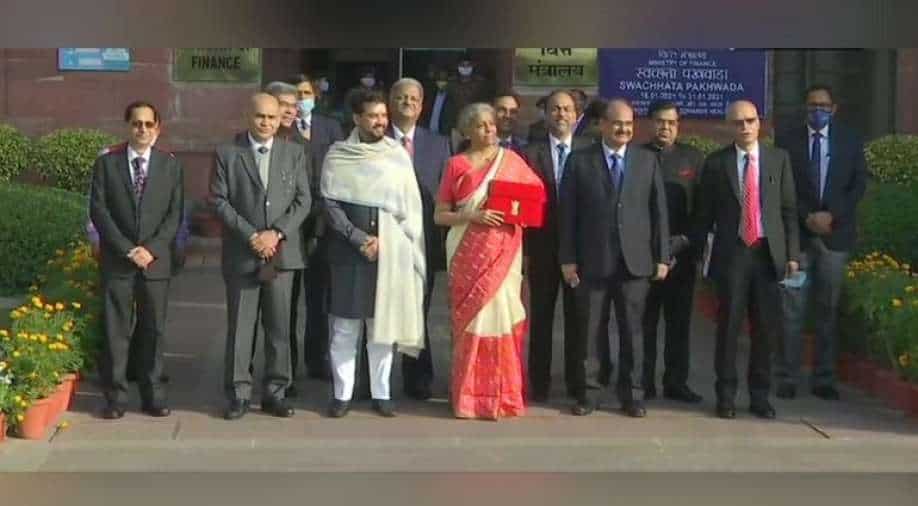 Finance Minister Nirmala Sitharaman is all set to present Union Budget 2021-22 in Parliament on Monday, at a time when India is recovering from the COVID-19 crisis.

The presentation of the Union Budget will begin with a speech by finance minister scheduled to take place at around 11 am.

Ahead of her third Budget presentation, the Finance Minister and her team will meet President Ram Nath Kovind and will likely be accompanied by her deputy Anurag Thakur and other officials of the Finance Ministry.

The Union Cabinet will hold a meeting at 10:15 am before the presentation. Usually, the duration of the presentation ranges from 90 to 120 minutes. This year, the Union Budget will be delivered in paperless form for the first time.

The first part of the Budget Session is scheduled to continue till February 15 while the second part of the session will be held from March 8 to April 8. Rajya Sabha will function from 9 am to 2 pm and Lok Sabha from 4 pm to 9 pm with Zero Hour and Question Hour.

Finance Minister had launched the "Union Budget Mobile App" for hassle-free access of Budget documents by Members of Parliament (MPs) and the general public using the simplest form of digital convenience, according to the Finance Ministry.

The App facilitates complete access to 14 Union Budget documents, including the Annual Financial Statement (commonly known as Budget), Demand for Grants (DG), and Finance Bill as prescribed by the Constitution.

In her speech, Sitharaman is likely to announce measures including a hike in infrastructure spending and tax cuts to boost the pandemic-hit economy when she presents the annual budget later on Monday, while deferring debt cut plans.

Nirmala Sitharaman is likely to increase spending by more than 15 per cent year-on-year in 2021-22 with an emphasis on infrastructure and healthcare, say senior officials and advisers involved in budget preparation.

The economy is projected to contract 7.7 per cent in the current fiscal year. However in its annual report on the economy to parliament on Friday the government forecast growth of 11 per cent for the coming fiscal year, after a massive COVID-19 vaccination drive and a rebound in consumer demand and investments.

Prime Minister Narendra Modi has said the budget will be in continuation of government efforts to revive sectors impacted by pandemic, which has hit all economic activities and led to millions of job losses mainly in small businesses.

The government is likely to hike import duties on a number of high-end goods in a bid to raise more than 210 billion rupees in revenue, government sources said.

New Delhi is likely to rely heavily on privatisation of state-run firms and sales of minority stakes in large companies such as Life Insurance Corp to fund its expenditure programme.

Ahead of the Union Budget, Sitharaman tabled the Economic Survey tabled in Parliament on Friday.

The survey unveiled two days before the Union Budget is broadly in line with forecasts by the Reserve Bank of India (RBI) which has said it expected the country's GDP to contract by 7.5 per cent in the year ending March 31.