Energy, diaspora in spotlight on PM Modi's first day in US 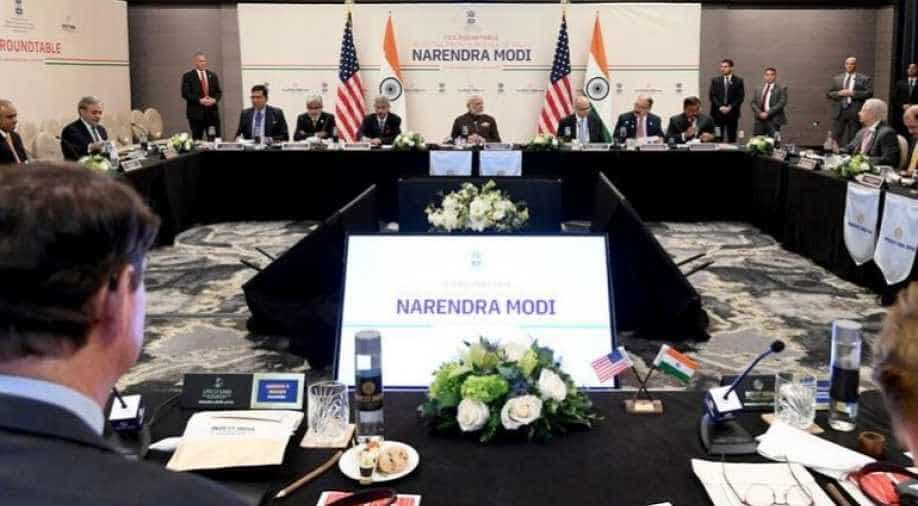 Prime Minister Narendra Modi with the CEOs from the energy sector, in Houston. Photograph:( ANI )

PM Modi's first engagement was with chief executives of top US energy companies.

Energy and meetings with members of Indian diaspora were the top focus of Prime Minister Narendra Modi on his first day of week-long US visit.

Modi's first engagement was with chief executives of top US energy companies.

CEOs of 17 global energy companies, whose combined net worth is one trillion US dollars, participated in the meet.

After the meeting, Modi tweeted "Had a wonderful interaction with leading energy sector CEOs. We discussed methods to harness opportunities in the energy sector."

It is impossible to come to Houston and not talk energy!

Had a wonderful interaction with leading energy sector CEOs. We discussed methods to harness opportunities in the energy sector.

Also witnessed the signing of MoU between Tellurian and Petronet LNG. pic.twitter.com/COEGYupCEt

The companies, who have presence in 150 countries, plan to increase there footprint in India.

Ministry of External Affairs spokesperson Raveesh Kumar said, "CEOs talked about enhancing their footprint in India. They lauded government efforts towards Ease of Doing Business, steps were taken towards deregulation in the sector, supported reforms and policies and were upbeat on the Indian economy."

Houston based company Tellurian signed an MoU with India's Petronet LNG in which the latter will invest $2.5 billion in former's proposed Driftwood LNG export terminal. In this way, Petronet will have rights to five million metric tons of LNG per year over 40 years.

The meetings came ahead of his biggest diaspora event in Houston — Howdy Modi — which according to organisers will see the participation of 50,000 people. The event begins at around 8.30 pm IST. He will also unveil a plaque for the groundbreaking ceremony of Eternal Gandhi Museum & plaque inaugurating Gujarati Samaj of Houston Event Centre & Shri Siddhi Vinayak Temple, Houston.

Modi is on a week-long US visit in which the focus is on trade, diaspora, counter-terror, climate change among others.

(With inputs from Aditi Tyagi)