Congress to contest 95 seats in Telangana, leaves 24 to allies 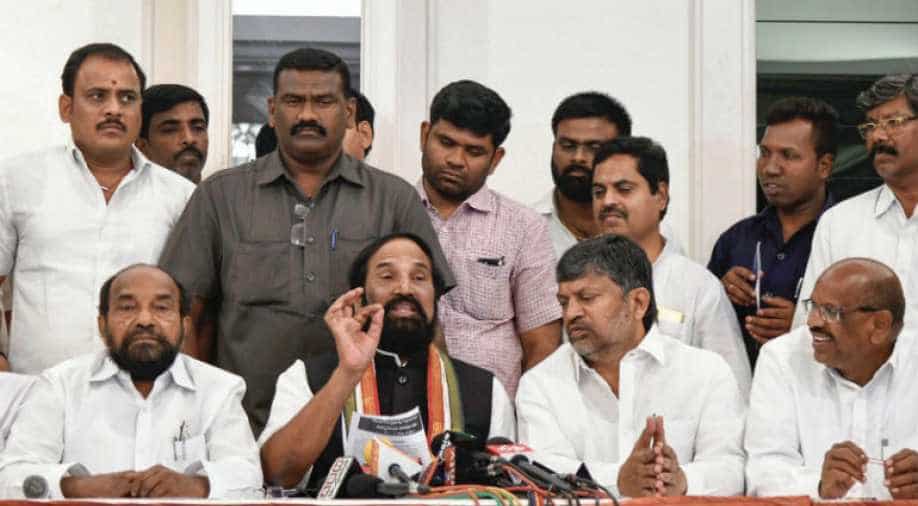 Party sources said the Telangana leaders submitted a list of probable candidates to Rahul Gandhi for his approval.

The Congress would contest 95 seats in the coming elections to the 119-member Telangana assembly, leaving the remaining to partners of the proposed grand alliance, AICC In-Charge of the state R C Khuntia said on Thursday.

The list of the party candidates would be released on November 8 or 9, he told reporters in New Delhi.

The Congress, Telugu Desam Party, Telangana Jana Samithi and CPI have decided to forge an alliance for the December 7 elections and are currently engaged in seat-sharing talks.

"We will fight in 95 seats and the rest will go to the other alliance partners. Of the 95 seats, we were supposed to take up 62 seats for discussion today, but took up only 57 seats. Rest will be taken up latter. The full list will be declared on November 8 night or November 9," Khuntia said.

Party sources said the Telangana leaders submitted a list of probable candidates to Gandhi for his approval.

Reddy said discussions were held on the seat sharing and candidates and the final decision will be taken by Gandhi.

He also said the Congress chief has formally approved the alliance in the state.

On seat sharing, he said an agreement had been reached with TDP under which it would contest 14 seats. Discussions were still on with reagard to the seats to be allocated to the TJS and CPI, he added.

The ruling TRS party has announced 107 candidates so far while the Asaduddin Owaisi-led AIMIM has declared nominees for eight seats. The latter was expected to declare candidates for another two or three seats shortly.

BJP, which is positioning itself as the alternative to the ruling TRS, is going it alone in the polls.